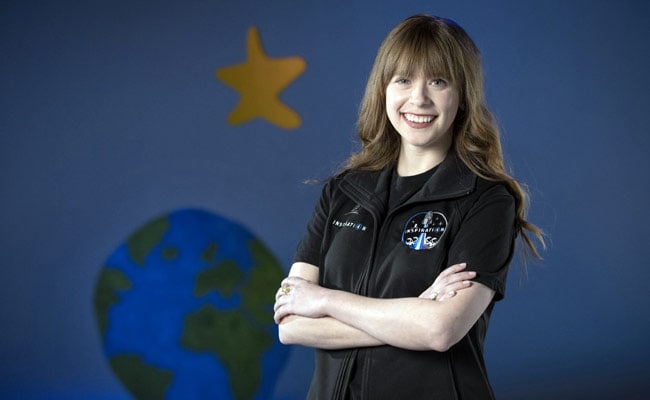 Due to the bone cancer she has overcome, Hayley Arceneaux has steel rods in her left leg.

By the end of the year, Hayley Arceneaux will be the youngest American in space and one of the first tourists to enter orbit unaccompanied by professional astronauts.

It’s a feat made all the more remarkable by her battle to defeat childhood cancer that robbed the 29-year-old of her dream of becoming an astronaut herself.

Due to the bone cancer she’s overcame, Arceneaux has steel rods in her left leg – which until recently were enough to shatter her hopes of going to space.

Enter Jared Isaacman, a young American billionaire passionate about space exploration who chartered a SpaceX Falcon 9 rocket at his own expense and decided to take three people with him, including Arceneaux.

Arceneaux said she hoped to be an inspiration with “what precedent this will set and what it will show to these other children who are undergoing cancer treatment.”

The first person chosen for this unprecedented mission, named Inspiration4 and which was to take off at the end of 2021, was in fact Arceneaux.

The young woman was treated like a child at St Jude Children’s Research Hospital in Memphis, Tennessee, which specializes in childhood illnesses, including cancer.

Isaacman hopes to raise $ 200 million for the hospital during its space mission.

“I got an unexpected phone call in early January, and it was from St Jude … They basically said, ‘Do you want to go to space? “”, Arceneaux told AFP.

“Right away, I said, ‘Yes, yes, absolutely! Said Arceneaux, who now works for the same hospital that treated her, as a medical assistant.

As a child, she visited the NASA Space Center in Houston, Texas. “Of course I wanted to be an astronaut,” she said. “But a few months later I was diagnosed with cancer, and it really changed my world.”

“Until now, astronauts must have been really perfect physically, which is not a category I fall into because of the surgeries I have had on my leg. And that’s one thing that fascinates me so much with this mission, it’s opening up space travel to anyone, ”Arceneaux said.

“To be the youngest American to go to space is such an honor, but honestly, what excites me the most is being the first pediatric cancer survivor to go to space,” he said. she declared.

“I would love to just inspire my patients to dream big and not limit themselves. And I really hope to show them while I’m in space that anything is possible.

One of the two remaining mission seats will be chosen from those who enter a raffle and are encouraged to donate to St Jude’s.

The other will be chosen by a panel of entrepreneur judges who use an e-commerce tool from Isaacman’s company, Shift4 Payments.

They will be announced later this month and will begin their training with Isaacman and Arceneaux. “First, we are going to do the centrifuge training, prepare our body for the G forces that we are going to feel,” she explained.

“Little silly questions, but also how does it work, how does the rocket go up, how are we going to orbit the Earth?” she added.

SpaceX said that during the multi-day mission, astronauts will orbit Earth every 90 minutes.

The mission will ride in SpaceX’s Dragon capsule, the same model that successfully carried four astronauts into orbit and to the International Space Station in mid-November 2020.

After the mission, the spacecraft will return to the atmosphere for a water landing off the coast of Florida.