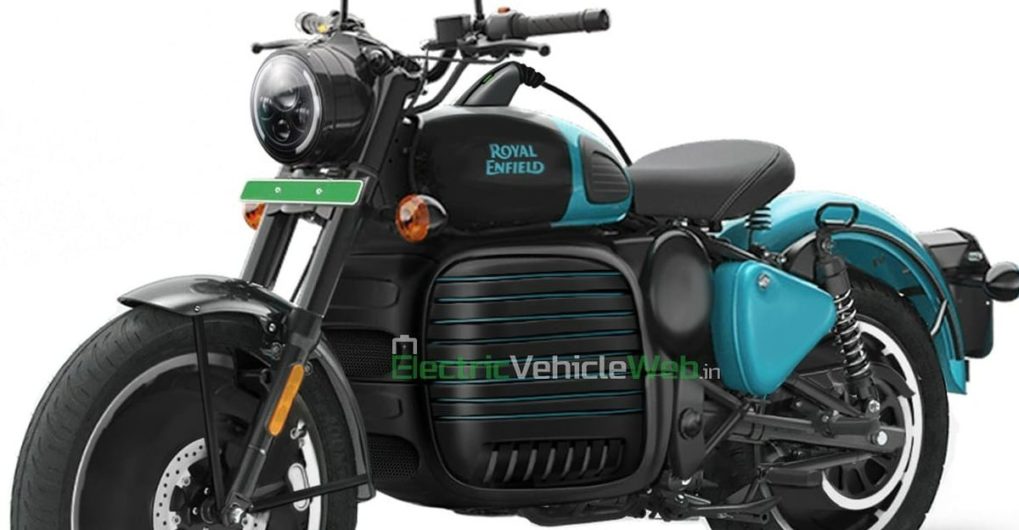 Royal Enfield is the oldest motorcycle manufacturer in the world and is a popular brand in India and around the world. They are famous for their modern retro looking motorcycles suitable for long distance cruises. One of the best-selling models in the line is the Bullet and Classic 350 motorcycle. Just like many other manufacturers, Royal Enfield is also planning to enter the electric vehicle space and they have already started work. In the next two or three years, they are expected to bring their first electric motorcycle to the market. Royal Enfield hasn’t shared any information regarding the next electric bike, but chances are the first electric bike will be based on the Classic 350 motorcycle. Here we even have a speculative render that shows what that might look like.

The image was shared by Electricvehicleweb.in. The artist imagined the popular Classic 350 motorcycle in an all-electric avatar. The basic design of the motorcycle remains the same as the petrol version. It gets a retro design with round headlights, a teardrop-shaped fuel tank, an exposed rear fender, and a unique seat configuration. At first, the bike looks like a normal Classic 350, but several modifications have been made to it.

Starting from the front, the headlight has the round shape but instead of a halogen bulb it now offers a set of LED projector lamps with DRL. Since this is an electric model, it gets an electric blue paint shade with black. The engine has been completely removed and the space is now occupied by the batteries and the engine. The fuel tank is still kept as the fuel filler cap now serves as a point to connect the charging socket.

Since this is a fully electric motorcycle, there is no need for gear and clutch levers. Both have been removed and the front and rear brakes are now available on the handlebars itself. With the addition of batteries and electric motor, the weight of the motorcycle will increase a lot. RE will need to reinforce the frame so that the bike can support the weight. Another change in this new electric version is the way engine power is sent to the rear wheels. Normally in a Classic 350 there is a chain drive that goes from the engine to the rear wheel.

In the case of this electric version, RE could opt for a belt drive as it generates very less noise compared to metal chains. The belt will be connected to the engine and send all power to the rear wheels with minimal loss. Apart from these changes, the render also shows a new type of wheel on the bike.

The wheel seen in the picture is different from the regular alloy or spoke wheel. It looks like a unit specially designed for electric vehicles to reduce drag. Royal Enfield recently launched their brand new Meteor motorcycle based on the J platform. It is possible that the next e-bike will use the same platform. Royal Enfield took things seriously and also put together a new team for research and development.