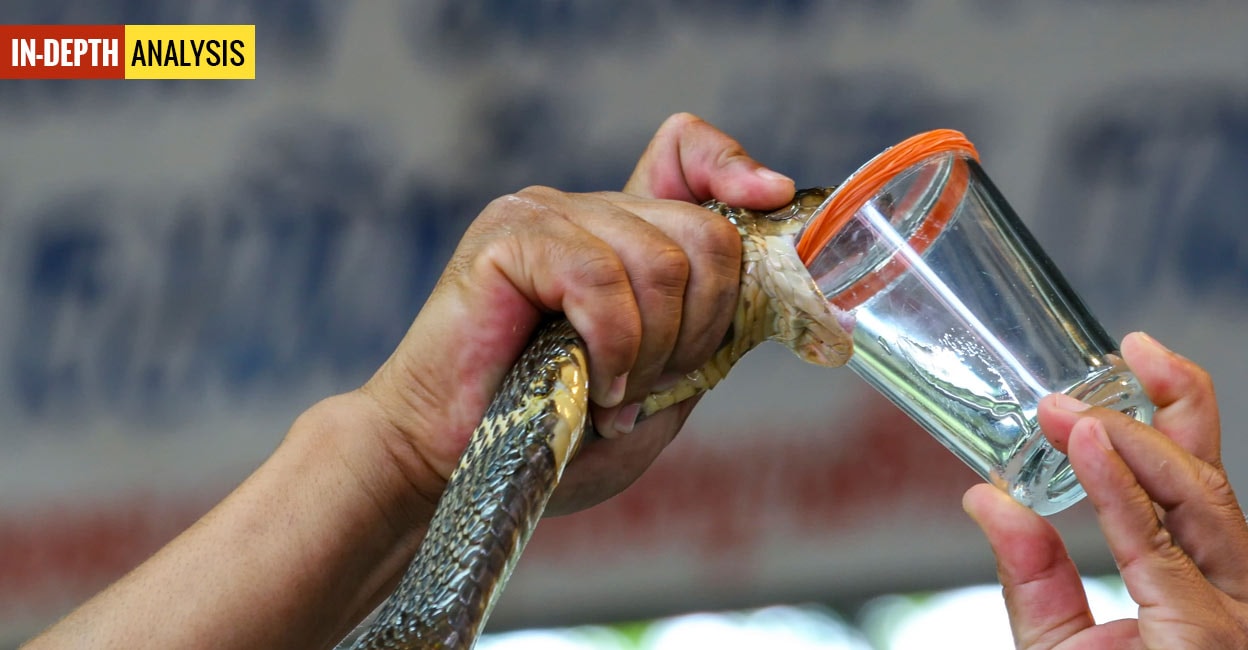 Animal keeper A. Harshad died after being bitten by a cobra while cleaning the hive at the Thiruvananthapuram zoo. Harshad’s death is the first of its kind in Kerala. Only a handful of king cobra bites have been reported in the country. But should Harshad’s tragic end be dismissed as a rarity? What is the remedy for cobra bite? Is treatment available in Kerala?

The average lifespan of a king cobra is up to 20 years. Adult snakes weigh 18 to 20 kg. The venom bag will be larger accordingly. Cobra venom is less severe in India than in cobras and conch shells. However, if a cobra bites, 0.25 mg of venom enters the body, while 5 to 7 mg of venom enters the body in a single bite. This amount of poison has the power to kill 20 people. This makes the cobra even more dangerous.

At the same time, the cobra, like other venomous snakes, has the ability to deliberately inject venom (dry bite) and inject less venom. It is estimated that 40% of cobra bites do not enter the body. The venom is usually injected to burn the prey. The perfectly calm king cobra does not generally attack humans. If we go ahead, we just have to change. The snake usually only hurts when it feels it is in danger. At the same time, the snake is extremely virulent due to hormonal changes in the cobra’s body during the incubation period. Anything that enters the area at this time will be attacked.

So far against humans

Cobras generally inhabit forests and colder climates. Very little contact with humans. However, in recent years it has become more common in populated areas. Rajavempala has been caught from houses in Nemmara and Alathur in Palakkad district. Other snakes and lizards are the main food. Other king cobras are also eaten when grazed. Low food availability is considered to be the main reason for their migration.

Only two deaths from cobra bites have been officially confirmed in India so far. The first was Praful Patel, 67, a snake catcher in Karnataka in 2016. Vinaya was handled carelessly while catching the snake. This is the second death at the Thiruvananthapuram Zoo. At the same time, there are many cases of survivors being bitten by a king cobra.

∙ Antivenom only in Thailand

A small amount of king cobra venom is injected into the body of a horse or camel. Antibodies to the toxin are formed in the body over a period of four to six months. This antibody is collected for antivenin. In the same way, the antivenin for the most venomous snakes in India such as cobras, snakes, silver lizards and cigars will be produced in the same way. However, an antivenin is generally sufficient for their venom. This is what is currently available in our country.

Antivenom for cobra venom needs to be specially produced. The antivenin for cobra venom was developed at the Central Research Institute in Kasoli, Himachal Pradesh, India. Antivenom is rarely needed as these are very rare human cases. Antivenom, which was produced at a cost of lakhs, stopped production in Kasoli years ago as it was running out of time.

Currently, the Queen Soyoba Memorial Institute in Bangkok is the only country in the world to produce antivenin for the king cobra. Antiven is currently being delivered to the US and European countries from the Soyoba Institute.

∙ Medicine will reach Nedumbassery only!

In Kerala, the presence of the king cobra has been reported several times in the Palakkad and Malampuzha dam areas along with human settlements. It is in this context that Dr. Joby Paul, a toxicologist at the Palakkad Institute of Medical Sciences, attempted to bring antivenin to Kerala. In 2014, he contacted the director of the Soyoba Institute and agreed to buy the drug.

The goal was to supply 25 fields at $ 40 per field. All the equipment for the import was prepared and the permits were obtained. In order to receive the medicine delivered by the Institute at Nedumbassery Airport, the permission of the Drugs Control Board was required. Although this was done several times, Dr. Joby abandoned the attempt as he did not get permission.

The Drugs Control Board was of the view that permission could not be granted to cross a number of legal loopholes just for the purpose of delivering small quantities of fields. However, Dr. Joby points out that the incidence of cobra attacks is very low and even if more fields are reached, it will be wasted. The drug can be stored intact for up to 5 years. Dr. Joby says that with the intervention of the government, the medicine can still be delivered to Kerala within a week. Dr. Joby Paul has saved the lives of more than 4,000 people who were bitten by snakes in Palakkad district alone in 7 years.

There is medical help

Funding will be provided by the Division dealing with Man-Animal Conflict (MAC) issues of the Forest Department. You can apply online at the Akshaya Center with the patient’s Aadhaar card and bank passbook signed by the doctor who treated the hospital bills. The amount spent on treatment (maximum Rs. 1 lakh) will be credited to the bank account within 2 months. If the patient dies, the next of kin will get Rs 1 lakh as compensation within a week of submitting the application.

English Summary: All about King Cobras and availability of anti-venom in India