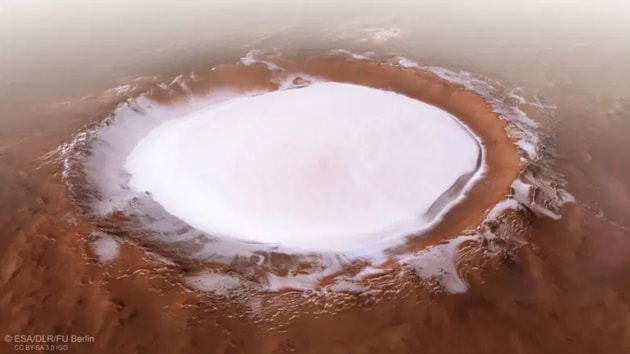 The film is based on footage taken by the European Space Agency’s (ESA) Mars Express Orbiter and features the 82 km wide water-ice crater on the Red Planet.

Look at the photo above … wouldn’t you want to go to a beautiful place like on your next vacation? Well, visiting this place may not be possible for us because it is on the planet Mars. So here’s the next best thing… ..a video of this Martian feature known as the Korolev Crater.

The film is based on footage taken by the European Space Agency’s (ESA) Mars Express Orbiter and features the 82 km wide water-ice crater on the Red Planet.

The Korolev Crater is located in the northern lowlands of the Red Planet, south of the large dune field of Olympia Undae which partially surrounds the northern polar cap of Mars, according to a statement on the ESA website.

The crater is filled with ice, with its center hosting a mound of water ice about 1.8 km thick year round. The reason for the year-round stable water ice in the crater is that its deepest part acts as a natural cold trap. The air above the ice cools and is therefore heavier than the surrounding air: air being a poor conductor of heat, the water ice mound is effectively protected against heating and sublimation.

ESA says the video of the stunning Korolev crater was created using images captured by the Mars Express High-Resolution Stereo Camera (HRSC), first released in December 2018, and data from the nadir and HRSC color channels; the nadir channel is aligned perpendicular to the surface of Mars, as if looking directly at the surface. The mosaic image was then combined with topographic information from the HRSC stereo channels to generate a three-dimensional landscape, which was then recorded from different perspectives, such as with a video camera, to render the flight shown in the image. video.

ESA released the video on July 2.

Scientists are eager to find evidence of water on the surface of Mars that would prove beneficial for the long-term goal of colonizing the Red Planet.