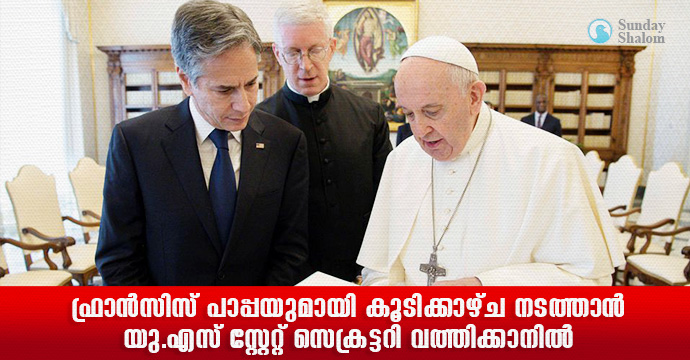 Vatican City: US Secretary of State Anthony Blinken has met with Pope Francis. The Vatican has not released details of the meeting, which lasted about 40 minutes, but said various issues were discussed. Vatican Press Director Matteo Bruni said the meeting was amicable and that the pope shared his memories of the 2015 US tour.

The pope also told him of his love for the U.S. people. Anthony Blinken visited the Vatican following his arrival in Italy as part of a diplomatic tour with European countries. The two then exchanged gifts. Anthony Blinken presented Pope with a sculpture of an olive-colored dove, a symbol of peace and freedom.

The pope also presented the sculpture with the inscription, “Let us fill our hands with the hands of others,” as well as the circular letters “Laudatho Sea” and “Fratelli Tutti”. He also blessed rosaries for him and his family. This was the first visit of the US Secretary of State to the Vatican during the administration of Joe Biden.

He also met with Vatican Secretary of State Cardinal Pietro Parolin and Foreign Minister Archbishop Paul Gallagher. The purpose of his European tour was to discuss with European leaders the post-epidemic social fabric. Ahead of his meeting with the Pope, he also took part in talks to restore peace in war-torn Libya.