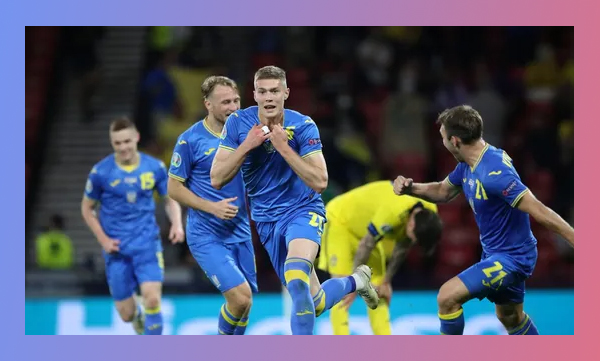 Glasgow (Scotland): Ukraine advanced to the quarter-finals of the Euro Cup, beating Sweden. Ukraine won the match by two goals to one at Hampden Park in Scotland.

The match between the two teams lasted for extra time. England will face Ukraine in the quarterfinals. Ukraine took the lead in the last minute through Artem Djokovic as the match progressed to a penalty shootout. Earlier in the 27th minute, Ukraine took the lead through Alexander Sinchenko. With two minutes left in the first half, Sweden equalized through Emil Fosberg.

Sweden’s Marcus Danielson was sent off in extra time as the game got rougher. One at least affected Sweden’s progress. The two teams that stood side by side on the ball pulled out attacking football. Sweden coach Jan Olof Anderson is interested in a 4-4-2 formation. Ukraine coach Andrei Shevchenko also tested the 3-5-2 formation. Both goals came in the first 10 minutes. In the 11th minute, Yarenchuk’s shot was deflected by Swedish goalkeeper Ryan Olsen.

Ukraine opened the scoring in the 27th minute. Sinchencho, who did not mark the cross from the right wing into the Yer Mollenko box, smashed it into the net with a smashing volley. Olson tried to stop but was hit in the arm and into the net. Sweden equalized in the 43rd minute. Sabarni tried to block a shot from Fosberg 25 yards out, but his body hit the net. Goalkeeper Heinrich Bushanan could only be a spectator. Both teams broke up in the second half. Sidorchuk’s shot bounced off the post in the 55th minute. Sweden were also held to a goal post in the next minute. In the 69th minute, Fossberg’s breakaway shot hit the crossbar once more. The match ended 1-1. In the 99th minute, Danielson was shown a red card, dimming Sweden’s hopes of victory.

The referee gave a red card to the player who seriously fouled Besed. The first goal was scored by Sinchenko. Sinchenko’s beautiful cross from the left wing gave Dobik the lead with a powerful header.