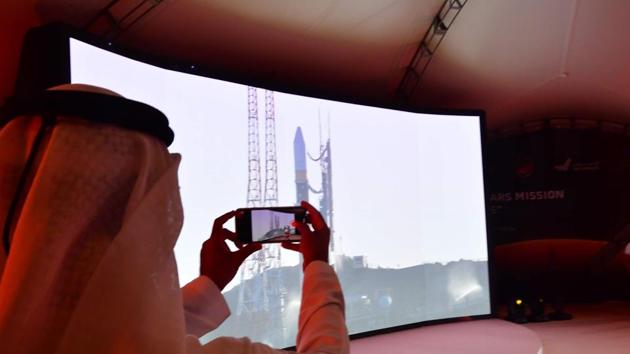 The Hope spacecraft will be launched from Japan’s Tanegashima Space Center at 1:58 a.m. UAE time / 6:58 a.m. Japan time on Monday (9:58 p.m. GMT Sunday) for a seven-month trip to the Red Planet, where it will orbit and return data to the atmosphere.

The first Arab space mission to Mars took off on Monday aboard a rocket from Japan, after weather delays delayed the launch of the “Hope” probe.

A live stream of the launch showed the rocket carrying the unmanned probe, known as “Al-Amal” in Arabic, taking off from the Tanegashima Space Center in southern Japan.

“We launched the No. 42 H-IIA launcher (H-IIA F42) on board the Emirates Mars Mission (EMM) spacecraft HOPE … at 6:58:14 (JST) (2158GMT)”, rocket maker Mitsubishi Heavy Industries said in a statement shortly after the launch.

Five minutes after launch, the rocket carrying the probe was underway, performing the first separation from its flight.

The Emirati project is one of three races to Mars, including Tianwen-1 from China and March 2020 from the United States, taking advantage of a time when Earth and Mars are closest.

In October, Mars will be relatively short at 38.6 million miles (62.07 million kilometers) from Earth, according to NASA.

“Hope” is expected to reach Mars orbit by February 2021, marking the 50th anniversary of the unification of the United Arab Emirates, an alliance of seven emirates.

Once there, it will enclose the planet for an entire Martian year, or 687 days.

While the objective of the Mars mission is to provide a complete picture of the meteorological dynamics in the atmosphere of the Red Planet, the probe is the basis of a much larger objective – to build a human settlement on Mars in the Next 100 years.

The UAE also wants the project to serve as a source of inspiration for Arab youth, in a region too often ravaged by sectarian conflicts and economic crises.

Several dozen probes – most of them American – have left for the Red Planet since the 1960s. Many have never made it this far or have failed to land.