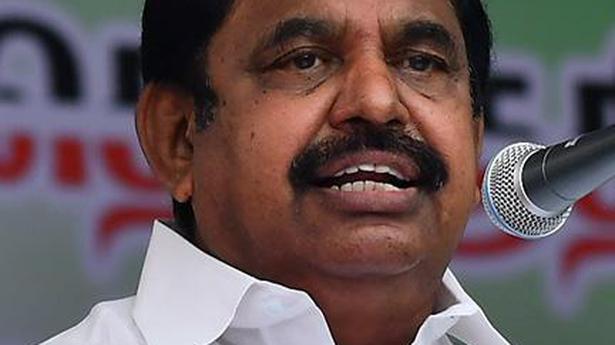 The Tamil Nadu government on Thursday announced an extension of the state’s COVID-19 lockdown until January 31, 2021, but with further easing of the borders. The relaxations will not apply to containment areas.

He banned people from entering beaches, including Chennai Marina, on the occasion of “ Kaanum Pongal ” on January 16.

In a statement, Chief Minister Edappadi K. Palaniswami announced that the use of indoor auditoriums for social, political, recreational, sporting, cultural, educational and religious events will be allowed from January 1, but at 50% of his capacity. “Prior authorization from the respective district collectors or the Chennai Police Commissioner, as the case may be, is required for these events,” he said.

The state government has allowed filming inside and outside the cinema and the small screen without any restrictions. Mr. Palaniswami also announced the easing of the borders to allow the public to enter all places of worship; a SOP should be followed in this regard.

But he argued that the electronic registration system for those entering Tamil Nadu, except those from Pondicherry, Andhra Pradesh and Karnataka, would continue.

“Through effective governance and public cooperation, the spread of COVID-19 has been brought under control,” Palaniswami said. “The death rate has fallen below 1.7%. Over the past 10 days, the number of new cases has remained below 1,100 per day, ”he said.

The Chief Minister reiterated his call for the public to follow all guidelines issued by the state government to contain the spread of COVID-19, including wearing face masks and ensuring physical distancing at the scene public. Authorities must ensure that these guidelines are followed, he added.

Switch easily from one article to another, as our pages load instantly