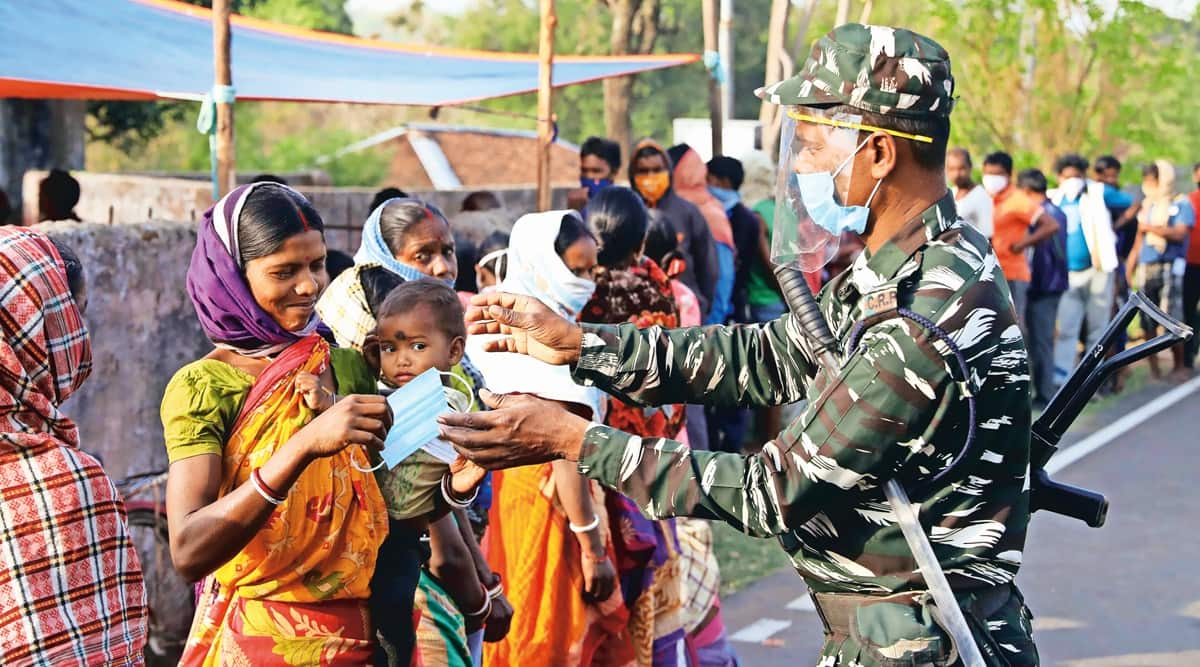 The first round of voting in 30 Assembly constituencies across five West Bengal districts on Saturday was marred by sporadic incidents of violence, complaints of rigging and snags in electronic voting machines. The state recorded nearly 80% (79.79%) of the votes.

Assam, meanwhile, registered 76.89% of the polls in the first phase, covering 47 of the Assembly’s 126 constituencies in total. The first phase will decide the fate of several political heavyweights, including outgoing chief minister Sarbananda Sonowal, state congressman Ripun Bora and jailed activist Akhil Gogoi.

No less than 191 candidates, including 21 women, present themselves during the first phase. Out of the 73.8 lakh electorate, women voters number 36.27 lakh and men 37.52. BJP and Trinamool are each competing for 29 seats out of a total of 30.

“Apart from some sporadic incidents, polls in 30 constituencies were conducted peacefully. At least 10 people have been arrested in various incidents, ”said Aariz Aftab, chief electoral officer in West Bengal.

In Assam, a total of 264 candidates, including 23 women, are in the fray in this phase, which has a total of 81.09 lakh eligible voters. A total of 11,537 voting booths were installed for the first phase. While the Congress, which is part of the “ mahajat ”, presented its candidates with 43 seats out of 47, the BJP is running at 39.

After voting in Dibrugarh, Sonowal tweeted: “My vote for the protection of Sabhyata, Sanskriti and the overall development of Assam.” Posing with his family after voting in Gohpur, Congressman Bora told media people want change and a congressional-led government in the state.

Surveys in West Bengal began under the intensive deployment of central forces – 732 companies in the five districts.

Earlier today, Prime Minister Narendra Modi called on the people to vote. “Today, phase 1 of the West Bengal Assembly elections begins. I would ask all those who are voters present at the polls today to exercise their right to vote in record numbers, ”he tweeted.

On Friday evening, a massive clash broke out in Patashpur, east of Medinipur, between TMC and BJP workers, in which two security personnel were seriously injured. Two people were subsequently arrested. On Saturday, Sushanta Ghosh, candidate of the Communist Party of India (Marxist) in the district of Salbon, was attacked by strangers. State CEO Aftab said seven people were arrested in the case.

During the day, Congress in Trinamool accused the BJP of seizing booths in Medinipur and central forces of not allowing people to vote. Such complaints emerged from Kanthi Dakshin under Purab Medinipur and Garbeta in Paschim Medinipur. TMC supporters also alleged that in the Assembly constituency of South Contai, despite the vote for TMC, votes were cast in favor of the BJP.

Delhi Election Commission sources have dismissed TMC’s allegations of malfunctioning EVMs. To TMC’s claim that voters in Kanthi Dakshin’s assembly seat voted for TMC but were registered in favor of BJP in the VVPAT machine, an EC official said: “We have verified this claim and it was incorrect. In polling station 216, a VVPAT malfunctioned and was subsequently replaced by another device. However, some people protested outside the polling station and briefly interrupted the vote. The president of the polling station even gave us a report on this incident.

The BJP, for its part, accused Trinamool of embezzlement and also claimed that the current assembly elections were less violent than those of the past.

In Contai, the vehicle of Brother Soumendu, the brother of BJP leader Suvendu Adhikari, was attacked after alleging that people were prevented from voting in the area. “TMC morons were rigging three stands. When we protested, they ransacked my car. I was inside and somehow not injured, ”Soumendu Adhikari said.

A delegation led by BJP National Secretary General Kailash Vijayvargiya met with the CEO after the incident. “This is the first election in six years with fewer cases of rigging and violence. To avoid even 10% of these cases in phase 2, we demanded that the EC put the anti-social elements together, ”he said.

A nine-member Trinamool delegation led by MP Sudip Bandyopadhyay also met with the Chief Electoral Officer (CEO) at noon and raised objections over the BJP’s proposal to change the existing procedure on stand agents. “We submitted a memorandum saying that the previous system – which required the polling officer to be a voter in the relevant voting booth – be retained,” Bandopadhyay said.

These rules can be revised, however, said CEO Aariz Aftab.