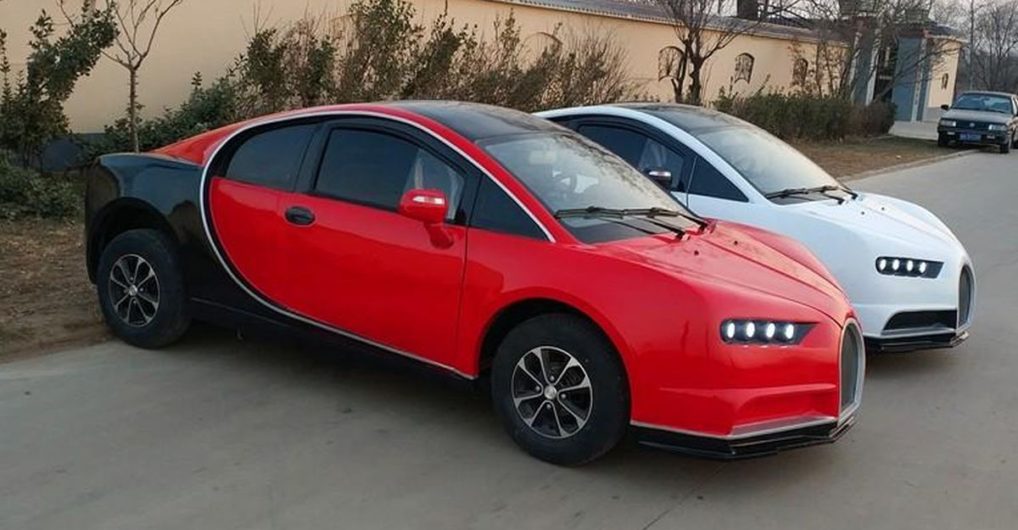 The Chinese are known to be among the most efficient workers in the world. They are respected around the world for their diligence. Hence, they are the largest supply market in many industries including the automotive industry. They are also known to copy many manufacturers, so most cars and bikes are copies of famous models released around the world. Here is a story of such a Bugatti Chiron copy car which is only available in China. The vehicle is called P8 and is manufactured by Shandong Qilu Fengde, based in China’s Shandong Province.

The copy P8 version was obviously a far cry from the original Bugatti’s four-turbocharged W16 petrol engine. One of the reasons why Chinese manufacturers are tapping into the copy market is China’s strict anti-pollution laws due to which large-displacement engines are heavily taxed. Bugatti is aware of this law and therefore has not marketed the Chiron in China as it comes with an 8 liter engine and therefore the taxes on the potential buyer could be huge.

The copy version must be personalized according to the law of the country. Therefore, they were forced to go for an electric powertrain and an extremely smaller version of the car. The P8, as the name suggests, can be driven even without a license as it falls under the LSEV or low speed electric vehicle. The P8 maker even copied the same double paint design from the original Bugatti Chiron. The P8 is available in a black and red paint scheme or a black and white paint scheme. The original Bugatti Chiron produces a massive 1,500 hp power while the P8 can only produce a maximum of 3.35 hp. The electric motor that powers the Shandong Qilu Fengde P8 is powered by a 72V lead-acid battery.

The P8 cannot exceed the speed limit set by the government of 50 km / h while the Bugatti Chiron can reach the maximum speed of 420 km / h. While not restricted by law, the P8 is said to reach a top speed of 65 km / h. The range of the P8 is decent with a 150km run on a full charge. It takes about 10 hours to charge on a 220V charging system. The P8 also gets flashy interiors with a digital dashboard, red carpet, and a 7-inch touchscreen infotainment system that can play MP5 videos.

The P8 also comes with a large red circuit breaker which is placed in the center console. This change is also a mandate of Chinese law. It stipulates that each LSEV must be equipped with an emergency circuit breaker. The trunk of the P8 is quite spacious and can even accommodate a charger for the car. Unlike the Chiron, the P8 gets rear seats which are essentially a coupe that can be called a two-seater. However, since the rear seats are more like a bench and are not comfortable to sit on, they could also be used as storage space.

Chinese manufacturers do not hesitate to introduce copy versions into Chinese laws to be launched on the market. There are a few manufacturers who have been served with court cases regarding the copy. China remains undefeated in the auto market and is able to influence many major manufacturers as well. One such popular example is that BMW is increasing the size of its grille, which is not welcomed by many people, but BMW responded by saying that it was done to cater to the Chinese market which liked large grilles.