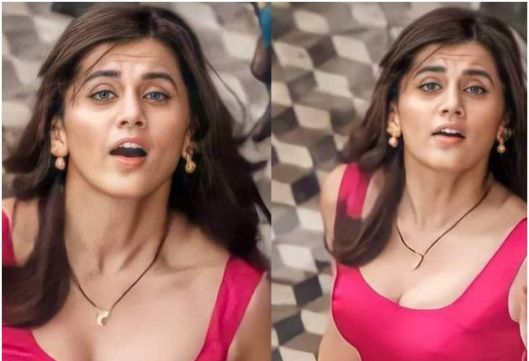 Tapsi Pannu is one of the most notable young actresses in Bollywood. Tapsi is one of the few actresses to have her own views. Tapsi, who is not afraid of criticism and trolls, often responds to trolls. Hapsin Dilrupa’s latest film is directed by Vinil Mathew. The film is being released on Netflix.

The other characters in the film are Vikrant Messi and Harshavardhan Rana. Tapsi says that both the actors were scared to act with her. Tapsi shared her experiences in an interview with a media outlet.

” When they felt like they were too scared while acting, I was making them comfortable. They looked like I was going to do something to them. I don’t know if it feels that way when you see me, or what else happened. Both seemed to be scared. I would go to director Vinil Mathew and complain, ”says Thapsi.

Asked if she had told her partner about acting with Iluki, Thapsi said she did not say no. “I did not say that I was acting together. This is my profession. I would like to see both official life and personal life. I don’t think he would ask me things in his professional life and make a decision. So that’s all he expects from me, “said Thapsi.