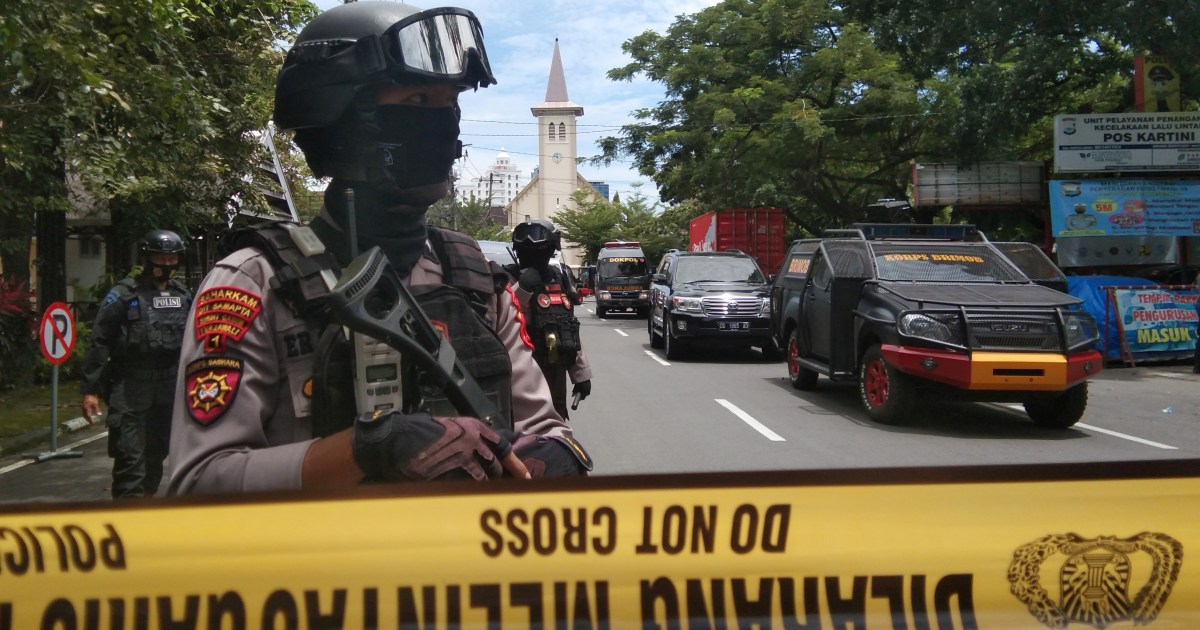 At least 14 people were injured after assailants detonated explosives outside a crowded church during Palm Sunday mass.

The explosion took place on Sunday when the congregation was inside the church on Sulawesi Island, police said, just as mass was ending.

Fourteen people were injured in the blast, national police spokesman Argo Yuwono said. The two suspects were the only ones dead.

Father Wilhemus Tulak, a priest who was leading mass at the time of the explosion, told Indonesian media that church security guards suspected two motorists wanted to enter the church. One of them detonated his explosives and died near the door after being confronted by guards.

He said the explosion occurred around 10:30 am (03:30 GMT) and none of the worshipers were killed.

Security camera footage showed an explosion that threw flames, smoke and debris in the middle of the road.

Makassar mayor Danny Pomanto said the explosion could have claimed many more lives if it had taken place at the main door of the church instead of a side entrance.

Police did not say who could be responsible for the apparent attack and there was no immediate claim of responsibility.

Police accused the ISIS-inspired Jamaah Ansharut Daulah (JAD) group of suicide attacks in 2018 on churches and a police station in the city of Surabaya, which killed more than 30 people.

Boy Rafli Amar, the head of the country’s National Counterterrorism Agency, described Sunday’s attack as an act of “terrorism.”

Makassar, Sulawesi’s largest city, reflects the religious makeup of Indonesia, the world’s largest Muslim-majority country with a sizable Christian minority and followers of other religions.

“Whatever the motive, this act is not justified by any religion because it harms not only one person but also others,” Yaqut Cholil Qoumas, Indonesian Minister of Religious Affairs, said in a statement.

Gomar Gultom, head of the Indonesian Council of Churches, called the attack a “cruel incident” as Christians celebrated Palm Sunday, and urged people to remain calm and trust the authorities.

Indonesia’s deadliest attack took place on the tourist island of Bali in 2002, when bombers killed 202 people, most of them foreign tourists.

In the following years, the Indonesian security forces achieved significant successes in combating armed groups, but more recently there has been a resurgence of violence.