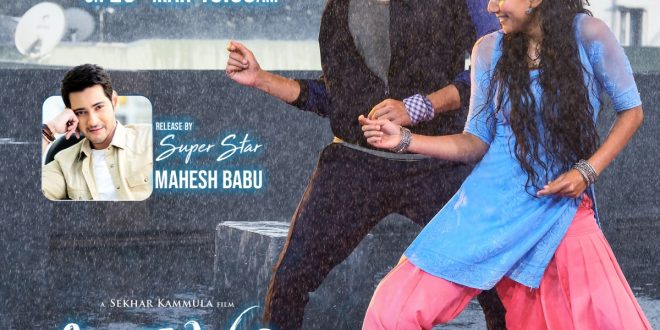 Director Sekhar Kammula’s upcoming film, “Love Story,” is one of the most anticipated films to be released next month. The music for the film was a sensational success, especially with the phenomenal success of Saranga Dariya.

The fourth song of the film will be unveiled by Mahesh Babu. Announcing the song’s launch, a poster is unveiled and we see heroes Naga Chaitanya and Sai Pallavi grooving in the rain.

Chay is playing the role of a Zumba trainer in this movie, so this song could be a complete dance number. The song “Evo Evo Kalale” will be released tomorrow, which is March 25th.

“Love Story” has music from Pawan CH and this newcomer is turning heads with terrific tunes. Narayan Das K. Narang and Puskur Ram Mohan Rao have produced “Love Story” and its release is scheduled for April 16.