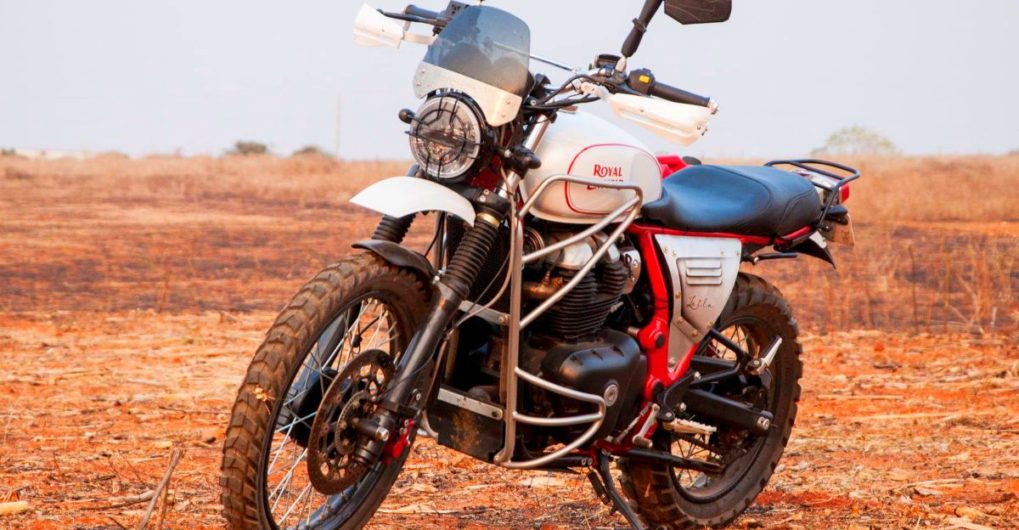 The Himalayas are known to be an excellent off-roader that can also be used for touring. That said, it lacked that engine punch that people want when they’re on tour or off-road. Since the launch of the 650 twins, which are in great demand, people have been hoping that Royal Enfield will give them a Himalayan with that 650cc parallel twin engine. However, so far there is no official announcement from the manufacturer for a more powerful version of the Himalayas.

For this reason, many people have started modifying their own Interceptor 650 to make it more functional off-road and for touring. Here we have an Interceptor 650 which has been modified by Eimor Customs so that it can really go off-road. The bike is known as ‘Laila’ out of affection and the photos were uploaded to the Eimor Customs Facebook page.

The thought behind the motorcycle was simple. They wanted an all-terrain bike like the Himalayas that was as refined and powerful as the Interceptor 650. So they decided to keep the original chassis but would change other things like the suspension setup, wheels, tires, design, etc.

The first thing the store wanted to do was lose weight, as this is one of the most important things off-roading and it will help with other things as well. The original exhaust has been replaced by TEC Stinger 2-1 which is a stainless steel exhaust that comes from London. Instead of two individual exhausts, the TEC Stinger 2-1 combines them both into one and places it on the right side of the bike. The exhaust alone dropped the weight by 14 kg. While off-road crash protection is important, the store had to manufacture custom protection that was also lightweight. The bumper weighs only 4 kg while the seat base and skid plate are made of fiberglass. Then there are the custom aluminum side panels to reduce weight. In addition, to increase performance, the original air filter has been replaced with two KnN air filters for each air intake.

To give a proper off-road look, there is a raised front fender that was borrowed from the Himalayas, a headlight guard and other functional upgrades. The original headlight was replaced by Trucklite 27270 CMP while the rear light and battery were kept in stock. The paint job is also quite attractive. It was painted pearl white with the frame painted red.

The same red color was used for the stripes and the “Royal Enfield” badges. The engine is painted in matt black. The original circular mirrors have been replaced by Dual socket side mirrors. There is a custom seat and there is a 12V accessory socket that has been fitted. You can also mount a 5 liter fuel tank on the side.

Then we come to the mechanical improvements made for the off-road. The front and rear wheel size of the Interceptor 650 is 18 inches, which has been replaced by a 21-inch front and 17-inch rear. It now works on Metzeler Karoo 3 which are biased offroad tires. Up front they use Himalayan tubes with a YSS fork lift kit and YSS rear shock absorber for Himalayan.

Now that was a challenge for Eimor Customs. The original Interceptor’s suspension setup came with dual shocks, while the suspension the workshop wanted to use was a single shock. For this reason, they had to modify a lot of things. The electrical wiring, the relays, the fuse box and the battery have been repositioned so as not to interfere with the mono-shock. The swingarm and chassis have also been modified for the new rear monoshock. Thanks to the improved suspension configuration, the ground clearance of the motorcycle has increased, which is very useful for off-roading.