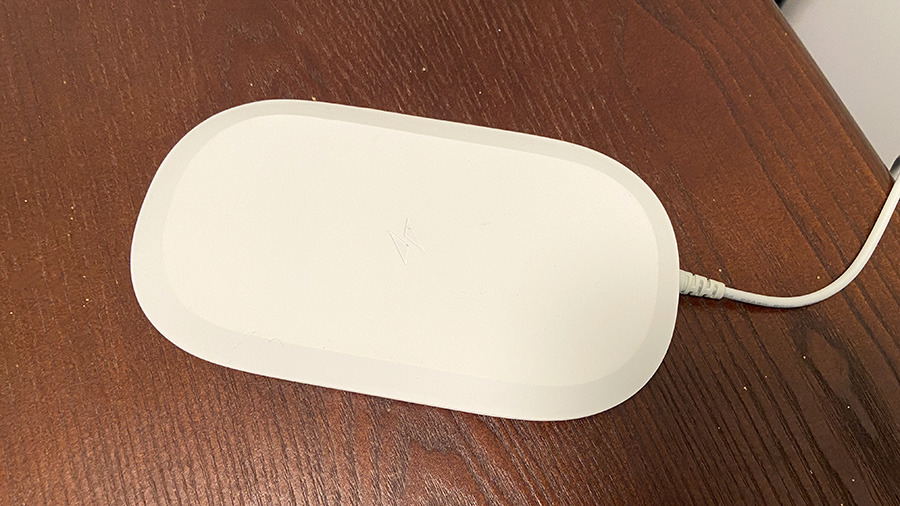 SanDisk’s Ixpand Wireless Charger Sync is a wireless charger with up to 256 gigabytes of storage, meant to back up your photos, videos and contacts – with a few glitches.

For those who don’t keep their photos and videos backed up in iCloud, SanDisk’s Ixpand Sync promises to provide an invaluable service – the ability to easily back up their iPhone content every time they charge it up.

It comes in three capacities – 64, 128, or 256 gigabytes – which allows you to free up some space on your iPhone if you’re not ready to purchase additional iCloud storage.

The Ixpand Sync has a large surface area with a satisfactory charging sweet spot. We like the bright white color, a change of pace from the often black or gray chargers. Of course, that means it will tend to get noticeably dirty, but it’s always nice to see some variety out there.

Instead of being a USB powered device, this charger has a power outlet, which was a bit surprising. While that means you won’t need to find an adapter for your wall outlet, it does take up space on the wall outlet. It’s slightly annoying if you were planning on using the charger with a docking station.

Because there’s internal storage, you’ll need to do a decent amount of configuration. The Ixpand app walks you through it, but the bottom line is that you will need to give the charger permission to connect to your home WiFi network and allow access to all photos on your iPhone. We had no issues with the initial setup.

As far as wireless chargers go, it’s decent. As noted above, this is a large charger which means you are more likely to touch the area that will charge your phone compared to something smaller.

It provides up to 10W of charging power, which means you’ll get a decent charging speed. We usually prefer to leave our iPhone on a wireless charger when not in use, so we know we always have juice when we need it.

Our only gripe on the charging front is that it sometimes seems a bit inconsistent to charge through cases, even when they’re relatively thin.

We tested the Ixpand Sync with an iPhone 11 housed in a Casetify Impact case. The Impact case hasn’t hindered wireless charging in the past with other chargers we’ve used, and we would consider it a slim case. Unfortunately, there were times when it seemed like it would trigger the charger’s foreign object detection and stop charging – but it wasn’t 100% of the time.

Removing the case and placing the phone directly on the charger alleviated this problem completely, but we’re not the type to tip a bare phone.

While we were very excited about the backup feature, we’ll be blunt – it wasn’t without problems. Sure, it backed up pictures, videos, and contacts when we threw it on the charger, and we thought that was great. This means that you can safely delete the files, giving you back valuable space.

Unfortunately, what wasn’t great was the fact that sometimes the images on the Ixpand would become inaccessible from the app, leading us to mistakenly believe they were corrupted.

Saved photos display correctly (left), compared to a failed save when connecting to the wrong channel (middle, right)

Solving the problem wasn’t much fun either. We’ve done everything you should be doing. We restarted the iPhone first – which generally tends to resolve around 80% of the occasional app issues we encountered. This did not solve the Ixpand issue.

Then we reinstalled the app, which wasn’t the funniest thing. Going back through the laborious task of setting up the charger a second time was not ideal.

After extensive testing, we think we understand why this is happening. The charger doesn’t know what to do in case the phone connects to the 5G channel rather than the 2.5G channel of a router. So if your phone connects to the 5G channel instead, it won’t back up your photos and for some reason it seems to make existing images on the charger inaccessible from the app, even if you’re connected via Bluetooth.

The solution is relatively simple, just connect your phone to the 2.5G channel. Of course, that assumes you’re thinking about doing it, instead of panicking that you’ve lost your photos.

Again, this is not a complete deciding factor, but something to keep in mind, especially if you are giving it as a gift to someone else.

In the end, we found it quite disappointing because we like the idea. Backing up photos at the end of the day when you charge your phone was something we were very excited about. We thought this would be the perfect use case for parents and less tech-savvy people who regularly run out of photo space, but it could cause frustration if they stop saving photos.

Another small gripe is that the Ixpand still uses micro USB instead of USB-C like most devices have moved on. This isn’t a big deal if you only get the images back to your phone, but if you plan to move your images to your MacBook, it may require specialized adapters or cords.

Ixpand Sync is a great concept, but we think it could be executed a bit better. As long as you can make sure that your iPhone will reliably connect to your 2.5G wireless router channel and your iPhone case is not too thick, it can fit perfectly into your life. However, if you can’t, be prepared for a bit of frustration here or there.