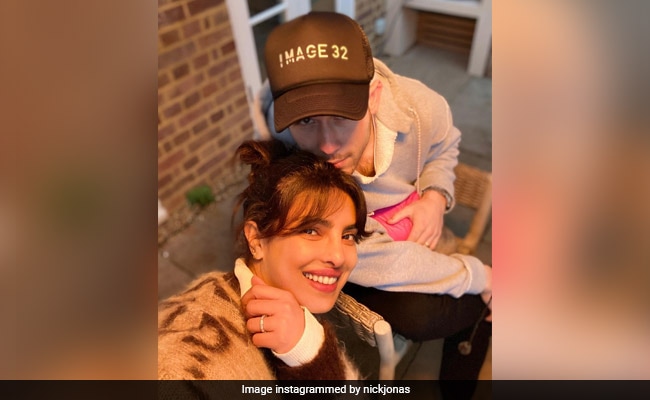 Nick Jonas lit up Instagram on Sunday by sharing a beloved photo of himself and his wife Priyanka Chopra on his Instagram profile. Nick and Priyanka are currently in London. The couple live in California but Priyanka moved to London last year to complete the filming schedule for her new Hollywood movie. Text for you and her stay was extended after the UK’s third lockdown due to the increase in COVID-19 cases. In his recent Instagram post, Nick Jonas shared a selfie, in which Priyanka Chopra can be seen holding the camera and smiling wholeheartedly with Nick posing for the camera holding their pet Diana. Sharing the photo, Nick Jonas wrote: “My” with a red heart icon. Reacting to her post, Priyanka Chopra also dropped a red heart emoji.

Priyanka Chopra, who recently opened her Indian restaurant in New York City, opened up about her connections to Nick Jonas and what she initially thought of him in an interview with Oprah Winfrey. She said she didn’t take Nick “seriously” when they started talking, but later learned how “self-confident” he was. She told Oprah: “I really judged the book by its cover. Honestly, I didn’t take it very seriously when Nick was texting me. I was 35 and I want to get married and I want to have kids. 20 years old … I don’t know if this is something he would want to do. I did this to myself for a while until I was really dating him. Nothing got to me surprised more than you know him. He’s such a self-assured man, so sane, so excited about my accomplishments, my dreams… you know. Such a true partnership, he gives me everything we do together, that I really believe my mother manifested it. “

Priyanka Chopra recently gave her fans a taste of her restaurant Sona. Looked: