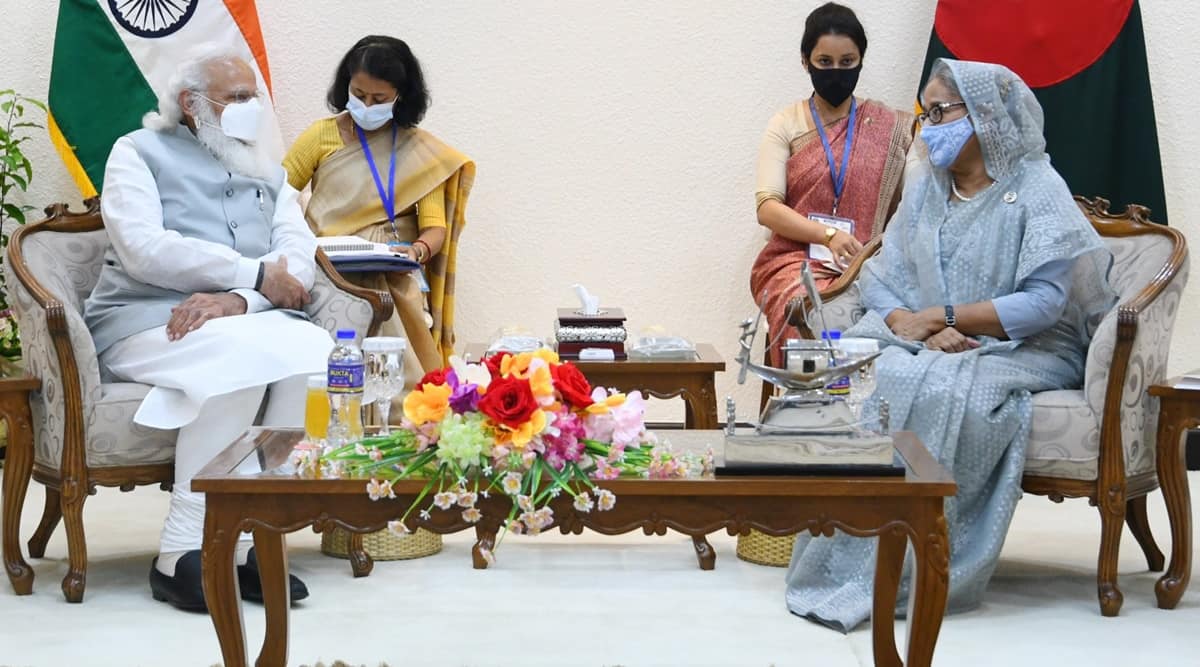 Prime Minister Narendra Modi, during the second day of his visit to Bangladesh, held a delegation-level meeting with his Bangladeshi counterpart Sheikh Hasina and signed five memoranda of understanding to further strengthen bilateral relations between the two country.

A new passenger train connecting Dhaka and New Jalpaiguri on the Indian side was also jointly inaugurated by PM Modi and Hasina via video conference. It is the third passenger train after Maitree Express (Dhaka-Kolkata) and Bandhan Express (Khulna-Kolkata) between the two neighboring countries.

“India and Bangladesh have signed MoUs in key sectors such as disaster management, sports and youth affairs, commerce, technology and more. These will strengthen our development partnership and benefit the people of our nations, especially young people, ”Modi said.

Prime Minister Narendra Modi hands over the Covid-19 vaccines made in India to his Bangladeshi counterpart Sheikh Hasina on Saturday in Dhaka. (Source: Twitter / @ narendramodi)

“Trade and connectivity, cooperation and water resources, security, defense, electricity and energy, artificial intelligence, the environment and the societal application of nuclear energy were also part of of the discussion. A significant part of our third line of credit will be devoted to civilian nuclear cooperation. The transmission lines of the Ruppur nuclear power plant will be developed by Indian companies under the line of credit. The value of these transmission lines will be worth more than a billion dollars, ”he added.

In a humanitarian gesture, Prime Minister Modi handed over a key representing 109 vital ambulances to his counterpart Hasina. He also presented a presentation box as a symbol of India’s donation of 1.2 million doses of COVID-19 vaccine to Bangladesh.

The two leaders also jointly inaugurated three new border haats along the Indo-Bangladesh border, laid the foundations for a monument in Ashuganj in Bangladesh in memory of Indian soldiers killed in the 1971 liberation war and extended the work of development at Rabindra Bhawan Kuthibari in Shilaidaha. from Kushtia in Bangladesh.

Prime Minister Modi reiterated India’s “sincere and continued efforts” to conclude the Teesta water-sharing agreement in consultation with relevant stakeholders during his talks with Hasina. “The Indian side has also called for the early finalization of a pending Feni River water sharing project with the Bangladeshi side,” Shringla said.

Earlier today, Modi, after offering his prayers at a temple in Orakandi of Gopalganj, birthplace of the Hindu mystical figure and spiritual guru of the Harichand Thakur community, said the two countries wanted stability, love and world peace by emphasizing that New Delhi and Dhaka want the world to progress through its own development.

Modi announced that India will modernize a girls’ college and establish a primary school in Orakandi.

“The two countries are facing this pandemic and fighting it together. India is working hard because it believes it is its duty to ensure that ‘Made in India’ vaccines reach the citizens of Bangladesh, ”Modi added.