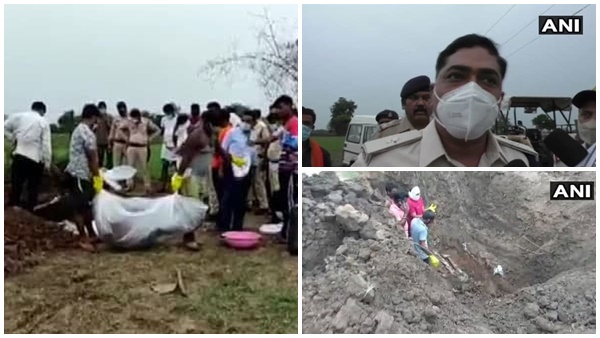 Five young women in the family went missing a month ago. The disappearance of five people together became big news. Their relatives lodged a complaint with the police. The investigation began but at first the police slipped into darkness. Things changed in the investigation conducted with the help of the technical department.

The police reached the field using a bulldozer and removed the soil and inspected it. It was then that the bodies of all five were found. The bodies of 45-year-old Mamta, their two children and two cousins ​​were found. They all went missing on May 13.

Her landlord Surendra Rajput was having an affair with Mamta’s daughter Rupali. He was the one who committed the murder. Five of those who were there to help were arrested. Police are still searching for the remaining seven. Police officer Sivadayal Singh said they would be arrested soon.

The bodies were buried in five pits at a depth of 10 feet. The accused had taken off the clothes of the girls. They were burned. The carcass was then covered with salt and urea. Police say this was done to decompose quickly. The bodies found were in a decomposing state.

Some members of the family had lodged a complaint with the police. The investigation lasted for days but no rust was found. Meanwhile, the accused also tried to mislead the police. According to the social media campaign, one of the missing persons was married and the others were safe with her.

But the police checked the phone records of Rupali, who is said to be married. It became clear that Rupali had a relationship with the landlord. He also collected information about people who had been in regular contact with him over the phone since May 13. When everyone was questioned separately, the murder was unraveled. Surendra’s readiness for another marriage led to controversy and murder.