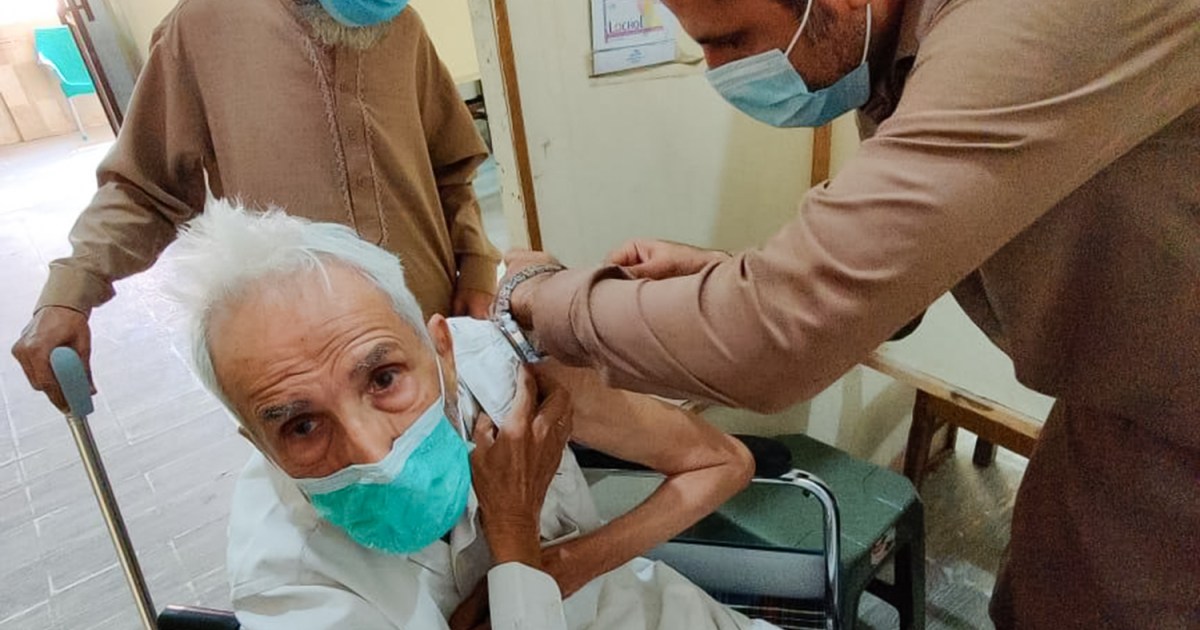 Islamabad, Pakistan – Pakistan has started vaccinating citizens over 60 against the coronavirus, officials said, launching the second phase of a nationwide campaign that has got off to a slow start so far.

Elderly citizens across the country began receiving the first dose of the vaccine at adult vaccination centers on Wednesday, after the country’s health minister announced the launch of the new phase of the campaign earlier this week.

“I knew that as soon as the vaccine came in, I had to take it,” said Basharat Ali Zaidi, 88, a retired telecom engineer from the city of Karachi in southern Pakistan, who was among the first seniors to walk away. receive the vaccine.

“I told my son about it, we registered online and [at the vaccination centre today] filled out the form and […] then after two or four questions to find out if I had any allergies… they gave me the vaccine, ”he said.

More than 300,000 people over the age of 60 have signed up to receive the vaccine, Health Minister Dr Faisal Sultan told Al Jazeera.

“[The] process started today – prioritizing older citizens, i.e. over 80, and [we] will work our way down. The registration of over 60s is around 300,000 to date, but is increasing every day, ”he said.

Once their contact details are verified against a government database, they will receive instructions on when and where to get the vaccine.

Vaccine recipients will be asked to stay in the immunization centers for about 30 minutes after receiving the vaccine to watch for side effects.

Drive slowly to pick up

Adoption has been slow to pick up, however, with many healthcare workers voicing concerns about the vaccine’s safety or effectiveness, officials and experts told Al Jazeera.

Vaccine adoption has also been affected by the public’s relative indifference to the coronavirus, as Pakistan’s experience with COVID-19 has been less severe than many other countries.

As of Wednesday, the country had recorded 595,239 vaccine cases, with 13,324 deaths since the start of the pandemic last year.

The country has experienced a significantly lower rate of serious illness and death compared to many European and other countries, according to government data.

The past two weeks, however, have seen a steady rise in daily infections as most government restrictions on large gatherings have been lifted and schools reopened.

The country’s National Coronavirus Command Operations Center (NCOC) on Wednesday reimposed a number of restrictions, including a nationwide mask warrant, recommending a 50% work-from-home policy for offices and reintroducing a 22 hour time limit for commercial activities.

The NCOC also said it was overturning an earlier decision to allow indoor weddings, indoor dining and the opening of theaters and shrines starting next week.

Currently, the country has vaccinated around 200,000 health workers, placing it almost last on the list of countries to have started vaccination, with 0.09 doses per 100 citizens.

The government has since started rolling out an awareness campaign on television and other media to encourage people to sign up for the vaccine, as well as to dispel misinformation about the vaccine.

Pakistan is expected to receive 14.6 million doses of the Oxford-AstraZeneca vaccine as part of the COVAX initiative, with the first shipment due to arrive this month.

Last week, Sultan, the Minister of Health, told Al Jazeera that he expected the vaccination campaign to gain momentum as more people received the vaccine, helping to allay the concerns of others about possible side effects.

“Other family members had concerns [about side-effects]”Said Abdullah Zaidi, the son of Basharat Ali Zaidi, vaccinated. “But they asked me to record them now that my dad is back. I think it does [assuage concerns]. “