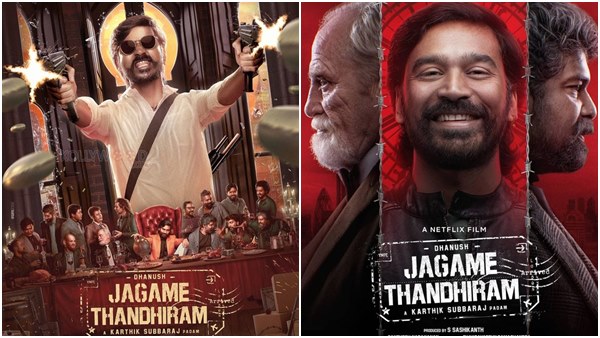 The film opens with the gangster characters Shivdas and Peterscott in the city of London. Before that there were a lot of people migrating to the UK in fake boats through the English Channel before even a small bit of titles. (Year 2012) The relevance of that scene will reach the audience halfway through the movie. After presenting each of Sivadas and Peter’s through their operations, the camera cuts straight to India and Suruli.

This is the intro column of Suruli, a local gangster who runs a grocery store near Madurai. Item to be received with a whistle in the theater. Colomas literally means murder. With the same cruelty of the first two main characters..with no blood in their eyes..Suruli soon arrives in London between Sivadas and Peter. As a visiting professor, consulting became a criminal. Peter’s strategy is to keep the Tamils ​​as the Tamils, as the saying goes, “Take the thorn with the thorn.”

Then for an hour and a half, you can only watch the London version of the hit-and-run games that have been seen for so long in so many underworld movies. The only novelty at this stage is the making style of Karthik Subbaraj and the unpredictability that Suruli sometimes shows in his actions. But when it is over, the matter comes to the fore. The spirit of Jagame Tantra is the scenes that start from the 94th minute with the words 2006, Puthumathalan, Vanni, Sri Lanka. It is a heavy punch that freezes the mind for the next few moments and scares even the heart. Peter, Sivadas, Suruli, and the games we have seen so far are nothing but cinema.

Those who are forcibly displaced from their homeland, the persecution, humiliation, second class citizenship, racism and hegemony that awaits them in the lands they reach and leave behind .. This is not just a matter for the Sri Lankan Tamils. It is a subject that can be embraced by humanity around the world. Karthik Subbaraj is just trying to say that with a specimen that Tamils ​​and Indians can easily relate to. The only problem with the film is that it spins without focusing on the subject. Two hours after the resolution, which focuses on his handwriting for 15 minutes, Subbaraj is scatterbrained again.

Peter’scott is a symbol of racism by writing white power on the number plate of his vehicle .. Game of Thrones star
Heavy Screen Presence by James Cosmo. He and the film have not lost their debut in Indian cinema. The same goes for Jojo George’s entry into Tamil cinema. The character who initially thought this was Sivadas later grows up to be a giant. It later becomes a characterization that remains strong even when retiring from the screen. Aishwarya Lakshmi also shined as Atila who became the focal point of the film from being just a heroine. Needless to say, Dhanush .. Cool Mass. His horizon is growing more and more.

Shreyaskrishna, the cameraman and Santosh Narayanan, the composer are the two sources of energy for the film. The only sad thing is that the genius of the two, who had to feel ten times more in the theater experience, was confined to the small screen. It seemed in many places that the service of the editor could have been made more useful. If it had been reduced to two hours, the zeal of the subject would have reached the masses again.

Karthik Subbaraj is an excellent director. Each frame has its own signature. But Jagame Tantra has a lot of problems and negative points as a film. Criticisms will naturally be leveled at him for not approaching a burning issue like the refugee issue in the depth and breadth it deserves. But I see it from the opposite angle. The director was able to bring such a subject to a large audience all over the world who had no great understanding of it. It’s not a small thing.

The power of a medium like cinema is far greater than we can imagine. When it is streamed in 17 languages ​​in 190 countries on a platform like Netflix, it increases tenfold again. What is meant is that it is not a documentary film, only that the director has mixed all the spices throughout it to bring the general audience together. I also disagree with the way racism and bikerism have been reduced to one person, Peter. But in the end, in the climax, the character is dealt with by someone who is unthinkable and we do not expect !!. Jagame Tantra does not have to be everyone’s cup of tea. But it’s not a bad “cup of tea” for sure.