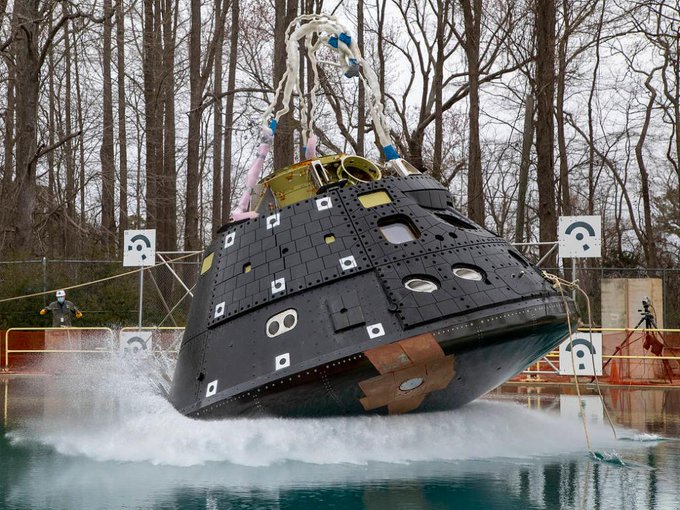 NASA has successfully completed the first water drop test for the Orion spacecraft, which will transport astronauts to the Moon and beyond as part of the Artemis missions.

Engineers at the Landing and Impact Research Center at the Langley Research Center in Hampton, Va., Initiated the test, with cameras capturing the fall of the 11-foot (3.35-meter) capsule into the “basin. ‘hydraulic impact’, which is basically a large reservoir. designed to simulate various landing environments.

For the first drop test of the latest Orion model, the spacecraft was released from a height of 18 inches.

(Photo: Kathy Lueders Twitter page)
“The @NASA_Orion spacecraft is causing a stir! @NASA_Langley engineers have started a series of four water impact drop tests to better understand what Orion and his crew can feel when they land in the ocean Pacific after #Artemis missions to the Moon, “Kathy Lueders, associate director of the Human Exploration Missions and Operations Directorate at NASA, wrote on Twitter on March 26.

NASA began testing the initial prototypes of Orion as early as 2011, with the Space Administration performing a series of drop tests in what has been referred to as a “ground test article” at the Langley facility, in using the collected test data for improvements in order to guarantee the best safety of its passengers.

However, NASA reports that the latest drop test uses the latest configuration of the Orion Multipurpose Crew Vehicle (MPCV) – the one developed at the Colorado facilities of prime contractor and aerospace manufacturer Lockheed Martin. This configuration is believed to be the “final design” of the Orion, NASA says in its latest press release.

In addition, the space administration explains that the data collected from these tests is necessary for “the structural design and verification of requirements before Artemis II”, the first crewed flight scheduled for 2023. The first Artemis mission, scheduled for launching in November 2021, is an unmanned flight that will go to the Moon and return to Earth.

Finally, the plan to “land the first woman and the next man on the moon by 2024” is taking shape with the Artemis III mission – the entire Artemis missions serving as the basis for space missions beyond.

“It’s less about trying to reduce model uncertainty and more about loading to design limits, getting the model higher in elevation and higher under load, not testing against requirements, but testing to the extreme, ”NASA project engineer Chris Tarkenton said in November when the water drop tests were first announced. He adds that the “design” test is not just the shape of the spacecraft, but how all of its components will interact and be manufactured in the future.

About the Orion MPCV spacecraft

The Orion spacecraft is a partially reusable space capsule, originally designed and offered by Lockheed Martin for the canceled NASA constellation program. It is however chosen as an exploration vehicle for the Artemis missions.

It is expected to provide food for astronauts during space missions and their safe re-entry upon their return to earth. The MPCV will be integrated into the Space Launch System, the most powerful rocket to date, and will be launched from the Kennedy Space Center in Florida. Although the Artemis I is an unmanned flight, it will still include the Orion in the launch vehicle to collect additional data for subsequent missions.

RELATED ARTICLE: Living on the Moon? Prepare $ 325,067 per month for a mortgage

Find more news and information about the Artemis mission in Science Times.