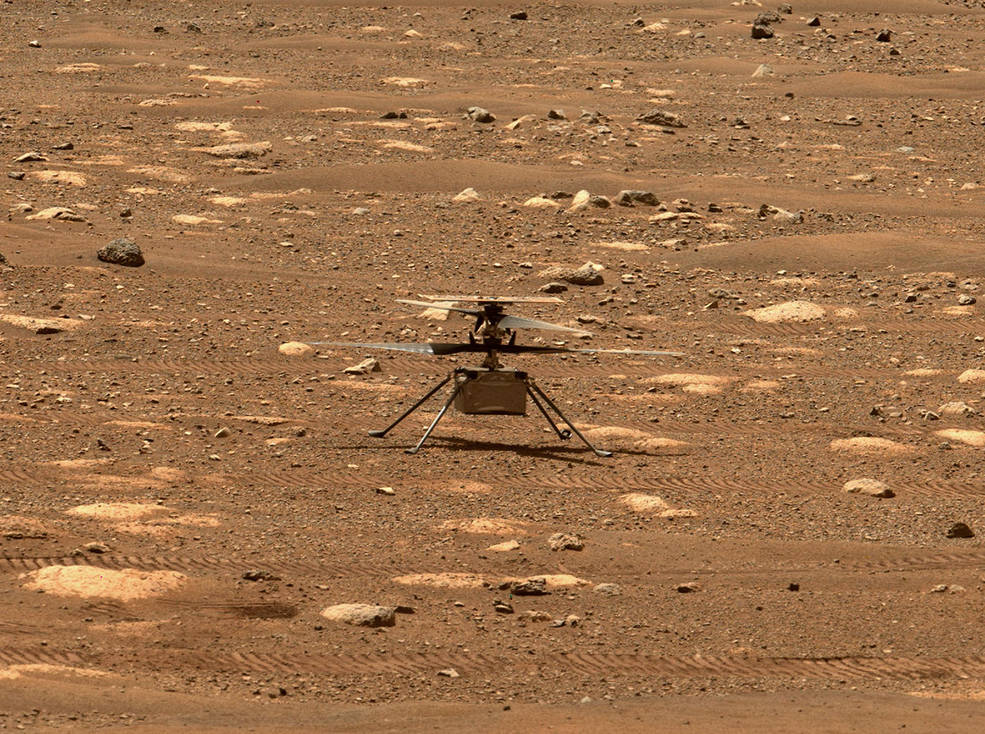 NASA has announced that based on data from the Ingenuity Mars helicopter that arrived at the end of April 9, the agency has chosen to postpone the first experimental flight of the Ingenuity Mars Helicopter until Wednesday, April 14 at the earliest. Additional information is available at: https: / /mars.nasa.gov/technology/helicopter/status/291/mars-helicopter-flight-delayed-to-no-earlier-than-april-14/

NASA’s Ingenuity Mars helicopter is two days away from humanity’s first attempt at powered, controlled aircraft flight to another planet. If all goes as planned, the 4-pound (1.8 kg) rotorcraft is expected to take off from Mars Jezero Crater on Sunday April 11 at 12:30 p.m. local solar time in Mars (10:54 p.m. EDT, 7:54 a.m. PDT), hovering 10 feet (3 meters) above the surface for up to 30 seconds. Mission control specialists at NASA’s Jet Propulsion Laboratory in Southern California expect to receive the first data from the first flight attempt the next morning around 4:15 a.m. EDT (1:15 a.m. PDT). NASA TV will broadcast live coverage of the team as data is received, with commentary starting at 3:30 a.m. EDT (12:30 p.m. PDT).

“Although Ingenuity does not carry any scientific instruments, the small helicopter is already making its presence felt around the world, as future leaders follow its progress towards an unprecedented first flight,” said Thomas Zurbuchen, associate administrator for science at NASA Headquarters. “We’re doing technology demonstrations like this to push the boundaries of our experience and provide something that future missions and the next generation can build on. Just as Ingenuity was inspired by the Wright Brothers, future explorers will take off using both data and inspiration from this mission.

The Mars helicopter is a high-risk, high-reward technological demonstration. If Ingenuity encountered any difficulties during its 30 sol (Martian Day) mission, it would not impact the science gathering of NASA’s Perseverance Mars rover mission.

Flying in a controlled manner on Mars is much more difficult than flying on Earth. Even though the gravity on Mars is about a third of that of Earth, the helicopter must fly with the help of an atmosphere whose surface pressure is only 1% that of Earth. If successful, engineers will gain invaluable in-flight data on Mars for comparison with the modeling, simulations and tests being done here on Earth. NASA will also gain its first practical experience of operating a rotorcraft remotely on Mars. These datasets will be invaluable for potential future missions to Mars that could enlist next-generation helicopters to add an aerial dimension to their explorations.

“From day one of this project, our team had to overcome a wide range of seemingly insurmountable technical challenges,” said MiMi Aung, Ingenuity Project Manager at JPL. “And here we are – safely on Mars – on the eve of our first attempted flight. We came this far with a never say die attitude, lots of friends from many different technical disciplines, and an agency that likes to turn distant ideas into reality.

Anatomy of a first flight

Sunday’s flight will be autonomous, with Ingenuity’s guidance, navigation and control systems performing the piloting. This is mainly because the radio signals will take 15 minutes, 27 seconds to bridge the 173 million mile (278 million km) gap between Mars and Earth. It’s also because almost everything about the Red Planet is demanding.

“Mars is tough not only when you land, but when you try to take off and fly too,” Aung said. “It has a lot less gravity, but less than 1% of the pressure of our atmosphere on its surface. Put these things together, and you have a vehicle that demands that every contribution be correct. “

The events leading up to the first flight test begin when the Perseverance rover, which serves as the communications base station for Ingenuity, receives instructions from Earth that day. These orders will be passed from JPL mission controllers via NASA’s deep space array to a receiving antenna aboard Perseverance. Parked at “Van Zyl Overlook”, at approximately 215 feet (65 meters), the rover will transmit commands to the helicopter approximately an hour later.

Then, at 10:53 p.m. EDT (7:53 p.m. PDT), Ingenuity will begin going through its myriad of pre-flight checks. The helicopter will repeat the blade oscillation test it had performed three soils previously. If the algorithms running the guidance, navigation and control systems deem the test results acceptable, they will activate the inertial measurement unit (an electronic device that measures the orientation and rotation of a vehicle) and the inclinometer. (which measures slopes). If all is correct, the helicopter will re-adjust the pitch of its rotor blades, configuring them so that they do not produce lift during the first part of the rotation.

It will take approximately 12 seconds for the rotor blades to turn from 0 to 2537 rpm, the optimum speed for the first flight. After a final check of the systems, the pitch of the rotor blades will again be commanded to change – this time so that they can dig into the few carbon dioxide, nitrogen and argon molecules available in the near atmosphere. of the Martian surface. Moments later, the first experimental flight test on another planet will begin.

“It should take us about six seconds to reach our maximum height for this first flight,” said Håvard Grip of JPL, Flight Controls Manager at Ingenuity. “When we reach 10 feet, Ingenuity will go into a hover which should last – if all goes well – for about 30 seconds.”

While hovering, the helicopter’s navigation camera and laser altimeter will provide feedback to the navigation computer to ensure ingenuity not only stays level, but in the middle of its 33 by 33 airfield. feet (10 by 10 meters) – a patch of Martian real estate chosen for its flatness and lack of obstacles. Next, the Mars helicopter will descend and land on the surface of Jezero Crater, sending data back to Earth, via Perseverance, to confirm the flight.

Perseverance is expected to obtain footage of the flight using its Navcam and Mastcam-Z imagers, with the footage expected to drop that evening (early morning Monday April 12 in Southern California) . The helicopter will also document the flight from its perspective, with a color image and several low-resolution black-and-white navigation images that may be available the following morning.

“The Wright brothers only had a handful of eyewitnesses to their first flight, but the historic moment was thankfully captured in a stunning photo,” said Michael Watkins, director of JPL. “Today, 117 years later, we are able to provide a wonderful opportunity to share the results of the first attempt at powered and controlled flight over another world via our robotic photographers on Mars.

The Ingenuity Mars helicopter was built by JPL, which is also managing this technology demonstration project for NASA headquarters in Washington. It is supported by the science, aeronautics and space technology missions directorates of NASA. NASA’s Ames Research Center in Silicon Valley, California and NASA’s Langley Research Center in Hampton, Virginia provided significant flight performance analysis and technical assistance.

At NASA Headquarters, Dave Lavery is the program manager for the Ingenuity Mars helicopter. At JPL, MiMi Aung is the Project Manager and J. (Bob) Balaram is the Chief Engineer.

JPL, which is managed for NASA by Caltech in Pasadena, Calif., Built and manages the operations of the Ingenuity Mars helicopter.