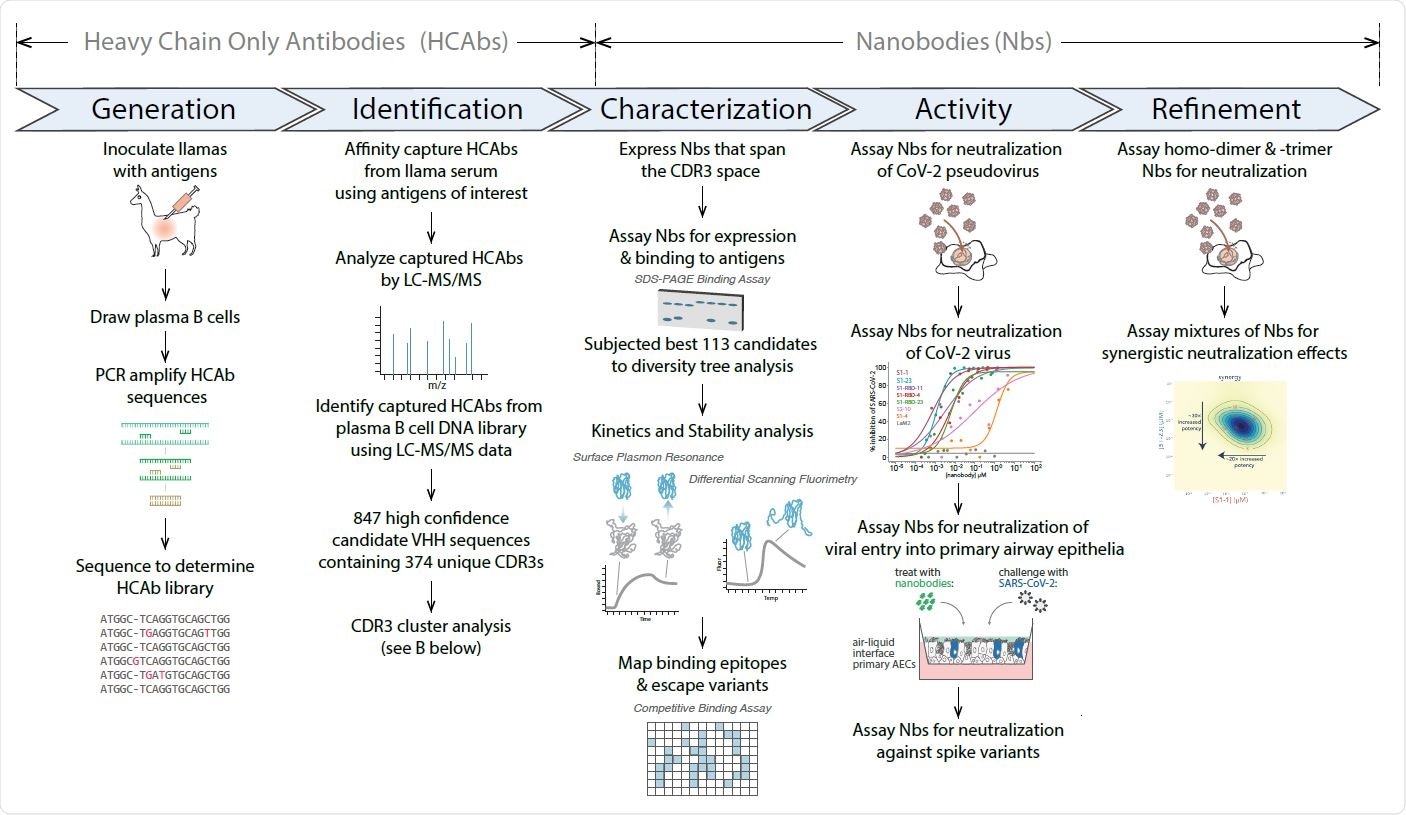 The researchers report a collection of nanobodies derived from llamas, some of which can work synergistically and work against new virus variants.

Although several strategies have been implemented to combat the COVID-19 pandemic, it continues unabated. Although several vaccines have been approved and used, vaccination rates have been slow and there have been challenges in equitable distribution of the vaccines. These, associated with the decrease in immunity in people already infected and the emergence of new viral variants, make it difficult to control the pandemic.

Several therapeutic strategies have used convalescent sera and human monoclonal antibodies. However, new variants have appeared, with mutations that may escape these therapies.

Nanobodies are an alternative to monoclonal antibodies. These are smaller proteins derived from animals like llamas and alpacas. Their small size allows them to bind to regions that are generally not accessible to larger monoclonal or polyclonal antibodies. They are also simpler to make because they can be easily cloned and expressed in bacteria. They can also be delivered directly to the lungs by nebulization.

Test of the neutralization capacity of nanobodies

In a study published in the bioRxiv * preprint server, the researchers report a collection of a large number of nanobodies that could potentially be resistant to escape mutations.

To build their suite of nanobodies, the team refined and optimized their previous method. They chose llamas with a strong immune response to SARS-CoV-2 and selected 113 nanobodies for further testing. A large proportion of the antibodies bind to RBD, while the other binds to the non-RBD part of the S1 subunit of the spike protein and the rest to the S2 subunit.

To identify nanobodies that will be resistant to viral mutations, the team selected a large number of nanobodies with strong RBD binding and tested them against the B.1.1.7 variant. Of the seven nanobodies they tested, they found that six showed strong binding to the variants. In addition, they also chose nanobodies that bind to the non-RBD regions of the spike protein.

The authors then categorized the antibodies based on which parts of the RBD they bind to. Their analysis revealed that RBD-binding nanobodies can be classified into three distinct groups. Within each cluster, the nanobodies could be grouped together in bins so that some bind to separate epitopes and partially overlap, binding to other separate epitopes.

This suggests that two or more nanobodies can bind to RBD at the same time. Further analysis revealed that at least three different nanobodies could simultaneously bind to RBD, which will be important in the design of nanobody cocktails for therapies.

The team also tested the best nanobodies against pseudoviruses carrying the spike protein of the B.1.351 variant. Some nanobodies showed no neutralizing activity against this variant, while one of them showed neutralization similar to that of the wild-type virus. However, two nanobodies showed increased neutralizing activity against the variant. The nanobodies that neutralized the pseudovirus also neutralized the true SARS-CoV-2 virus and human airway epithelial cells. The team also found that certain combinations of nanobodies can work synergistically and dramatically increase potency.

Using nanobodies cocktails mixed with the SARS-CoV-2 virus and allowing multiple replications, the authors also identified mutations that resist neutralization. Some potent nanobodies caused mutations in the same location as those generated by antibodies in human convalescent sera, such as E484K, indicating that the ACE2 binding site is a point of vulnerability for neutralization.

However, cocktails made with nanopersons also increased the genetic barrier to escape. Mixing two nanobodies required the virus to undergo two different amino acid substitutions, which made it more difficult for it to evade neutralization. Carefully choosing mixtures with more nanobodies can further reduce escape mutations.

Thus, escape experiments show that currently used or newer therapies may still lose their potency with the emergence of newer virus variants, which is very likely because some of the mutations seen in the experiments were not. observed so far in human isolates. However, by using a combination of nanobodies, which can work synergistically to enhance neutralizing power, the large collection of nanobodies generated by the team can help develop more potent treatments.

organicRxiv publishes preliminary scientific reports which are not peer reviewed and, therefore, should not be considered conclusive, guide clinical practice / health-related behaviors, or treated as established information.