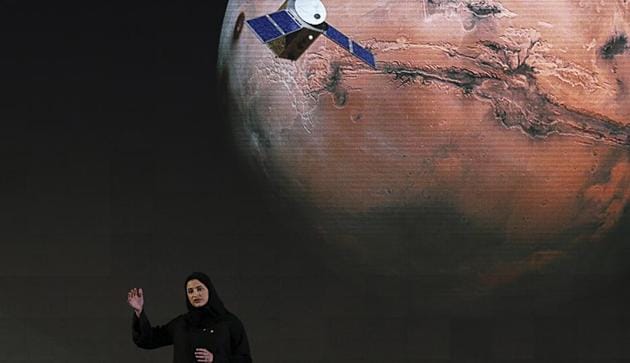 Amiri expressed his nervousness and said the team had invested more than six years in the mission which is primarily aimed at learning more about the Red Planet.

The United Arab Emirates are planning to send a spacecraft to Mars, and the reins of the Arab world’s first interplanetary mission are in the hands of a woman. In an interview with the BBC, scientist Sarah Al-Amiri, in charge of the mission, said construction of the probe took more than six years.

Amiri, who is the UAE’s Minister of State for Advanced Technology, expressed nervousness and said the team has invested more than six years in the mission which is primarily to learn more about the Red Planet. The mission will attempt to uncover the reason for the sterile and dusty atmosphere and environment of Mars by closely studying its weather and climate. The Red Planet once contained oceans just like Earth, what turned it into a dry, dusty planet remains a mystery yet to be solved.

In the interview, Amiri said that the vastness of the universe and the complexity of space have always excited and hypnotized her, thus igniting her curiosity.

The Mars mission represents a huge leap forward for the UAE, which has only launched satellites into Earth orbit from afar. The country’s spacecraft, named Hope or “al-Amal” in Arabic, was built with the help of American scientists.

Hope will be launched on a Japanese rocket and will likely take around seven months to reach the Red Planet. Once there, it will cycle around the planet for an entire Martian year – 687 days. The spacecraft was scheduled to be launched on July 15 at 12:51:27 a.m. (UAE time) from the remote Tanegashima Space Center in Japan. The launch was postponed due to inclement weather conditions.

“Deep down inside, I look forward to the first 24 hours after the separation, and this is where we see the results of our work,” Amiri said as reported by AFP news agency.

Receive our daily newsletter in your inbox