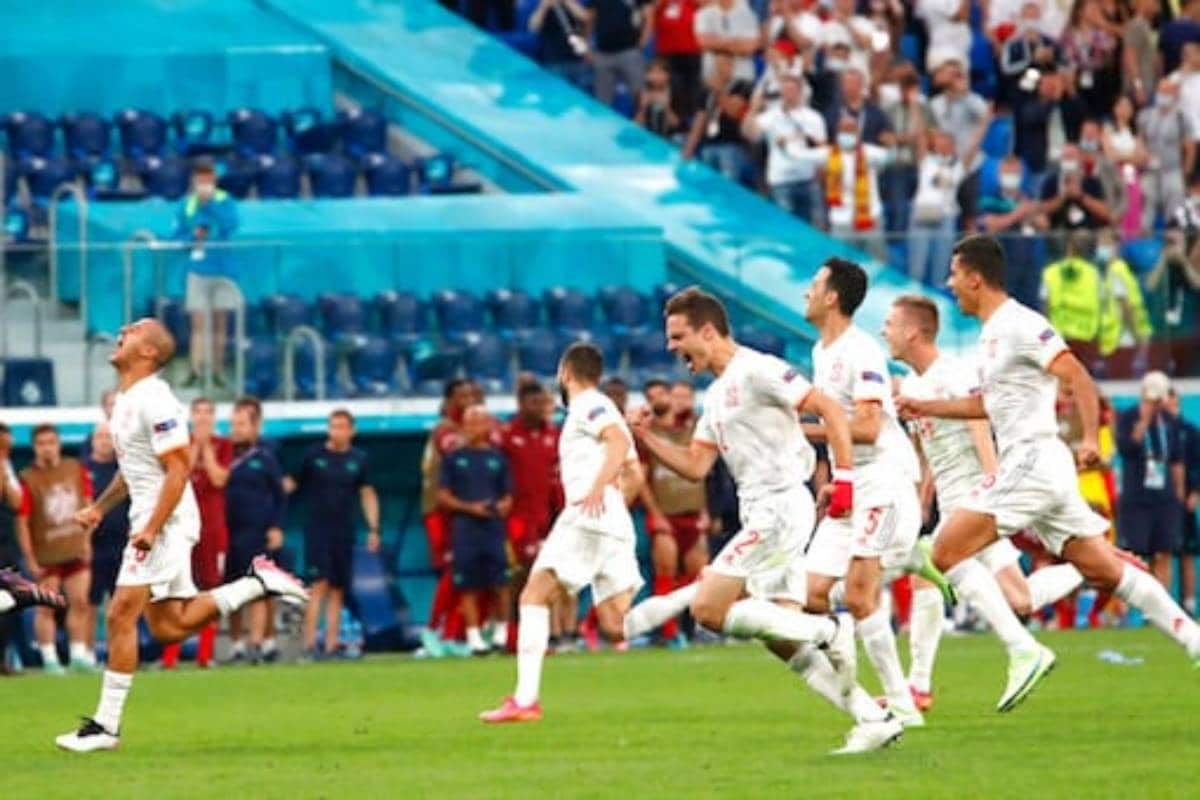 Spain advanced to the semi-finals of the Euro Cup after defeating coup heroes Switzerland in the first quarter-final. The Spanish team won the match in a penalty shootout, which turned out to be very exciting. The Spanish team won 3-1 in a shootout in which both teams lost two chances each. Goalkeeper Unai Simon’s brilliant saves helped Spain win the game despite missing the first chance. Swiss goalie Somer also made a save. Danny Olmo, Gerard Moreno and Mikhail Oyersbal scored for Spain, while only Mario Gavranovic scored for Switzerland. Fabian Shar, Manuel Akanji and Ruben Vargas could not find the target. The first shot, taken by Spain captain Sergio Busquets, bounced off the post.

The match continued into a shootout as the tie between the two teams did not break in the allotted time and extra time. Despite being reduced to 10 men, the Swiss team was able to extend the game to a shootout. They can come back with their heads held high despite losing the game.

Both the teams came down with changes in the decisive match. Switzerland made one change when Spain made two changes. The Spanish line-up held the ball from the start and put out the best passing game.

As a result of their early dominance, they took the lead early in the game. The Spanish team took the lead in the game thanks to an own goal by Swiss star Zachariah. The first corner of the match in favor of Spain in the eighth minute opened the way for their goal. The long-range Swiss striker was caught by Jordi Alba on a corner kick taken by the Spanish player Coke and then into the net by their goalkeeper Somer. Shortly afterwards, they got another chance in the 17th minute. On a free kick in favor of Spain for fouling Morata in front of the Swiss box, however, Coke’s shot flew over the crossbar.

In the 23rd minute, the Swiss forward Breil Embolo had to leave the field due to injury. In the 25th minute, the Spanish team had another chance, but Aspliqueta ‘s header was easily saved by Swiss goalkeeper Somer. The Swiss team, on the other hand, had a handful of chances but failed to score.

The Spanish team started the second half with a goal lead and came down with a change. Danny Olmok, who replaced Sarabia, had a great chance to score, but the player’s weak shot was caught by Swiss goalkeeper Somer. The Swiss team, on the other hand, shifted gears to attack to score the equalizer. The best moves were coming from their side. In the 56th minute, the header of the Swiss player Zachariah’s goal went wide of the Spanish post. In the 64th minute, goalkeeper Simon Spanish saved a shot from Switzerland’s goal. But soon after, the Swiss team scored their equalizer.

In the 68th minute, Swiss captain Sherdan Shakiri equalized for them. They took advantage of a mistake by the Spanish defense to score the equalizer. Laporta and Pavo Torres were unable to clear the ball that came into the box. This was due to the confusion between the two. Taking advantage of this error, the Swiss player caught the ball and passed it to his captain Shakiri. Shakiri, who received the pass accurately, easily got the ball into the net. With the draw, the game got excited again.

Switzerland came with the game but suffered a setback later. The team was reduced to ten men when Remo Fൂhrer was sent off for a dangerous tackle that led to the Swiss goal. With this, everyone thought that Spain would win the game, but they stopped the Spanish team from scoring until the end of regulation time.

After the game was drawn in regulation time, the Swiss team, with at least ten men in extra time for extra time, came up with a strategy to counter the Spanish line-up’s. Although they advanced only on occasional occasions, the Spanish defense was able to break through. On the other hand, the Spanish team continued to advance, overcoming the Swiss defense and coming close to scoring several times, but the Swiss goalkeeper, who was in breakneck form, was unable to get the ball into the net. Somer’s chances were shattered by several chances to score a goal for the Spanish players. The 30-minute extra-time goal of the player helped them to hold on without conceding a goal.

The Spanish team finally secured a place in the semifinals by defeating the Swiss team in a long match to a penalty shootout.