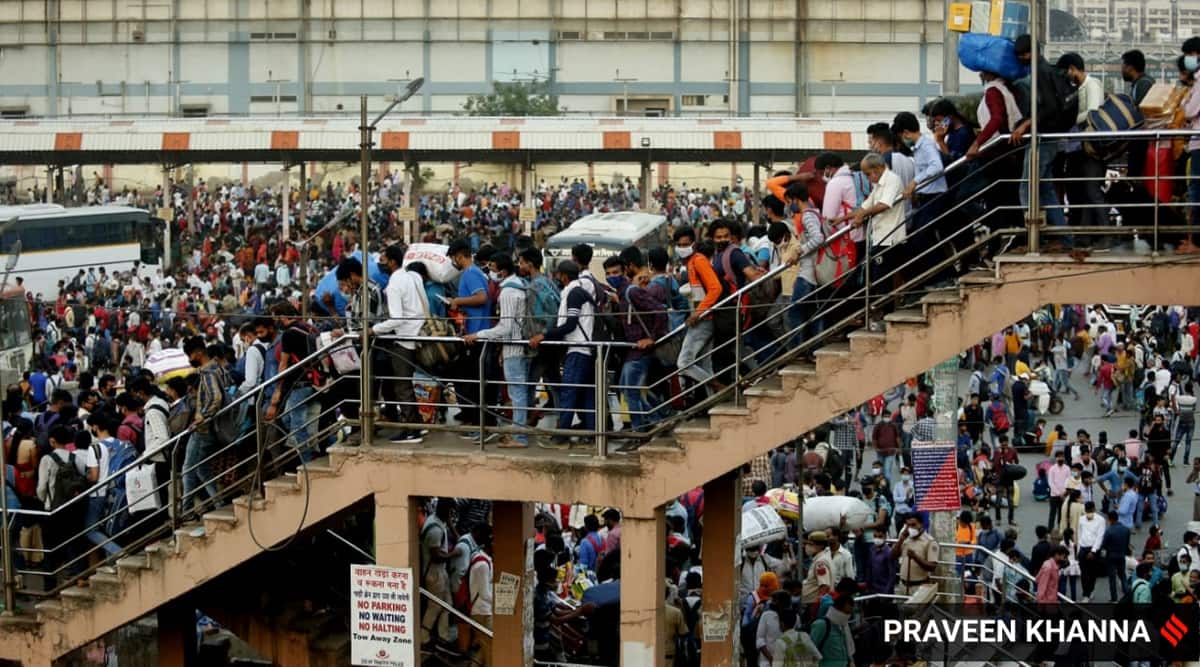 A construction worker returns home to Jharkhand, a worker back to Uttar Pradesh, a food kiosk owner packs his bags.

Hours after Delhi announced a weeklong lockdown to tackle the second wave of Covid, and despite a call from Chief Minister Arvind Kejriwal, a familiar scene from last year unfolded at bus stations and railways in the nation’s capital – hundreds of migrant workers lining up to leave home.

At the Anand Vihar interstate bus station, a large crowd of migrants gathered with packed bags, their destinations mainly in Bihar, Jharkhand and Uttar Pradesh. The refrain: “We don’t want to be stranded again.”

Many said they were particularly suspicious after last year’s experience when they suddenly found themselves out of a job and forced into long lines just to get food for their families.

Mohammad Mumtaz Ansari (20), a construction worker in Vasant Kunj, was on his way back to Dhanbad in Jharkhand with a group. “There will be no work during the lockdown, and since cases started to increase, housing companies are not allowing us to come in to work,” he said.

Ansari said he was stuck in Delhi last year and could not return home until June. He finally returned two months ago. “In Delhi last year we struggled to find food… to get a kilo of flour here, other food there… We even struggled to get food. During our entire stay here we had to ask for money from home, money that we had earned for our families. Unless work resumes properly, we will not come back, ”he said.

Mordhwaj (42) was waiting to leave with seven others for Sambhal in Uttar Pradesh. Working as a day laborer in Najafgarh, he said he came to Delhi in November. “We all thought the work had resumed and wouldn’t stop. We come back because we fear that, like last year, people will get stuck. I have children who go to school and I need money. But better be home now, at least we’ll reach it safely, ”he said.

Delhi and Mumbai witnessed a mass exodus of migrant workers last year after the nationwide lockdown in March. In Delhi, with all forms of transportation off the road, thousands of people started returning on foot, peaking in the first week of April.

Subsequently, industrial units and construction sites sat vacant for months, with most workers only returning towards the end of the year. But many of those who returned had to spend months looking for work, while some had taken out loans to get back on their feet. Another prolonged lockdown, they said, could again set them back seriously.

It’s not just the city of Delhi, migrant workers from the National Capital Region are packing their bags as well.

At New Delhi train station, Anil Prasad (32) and Rahul Kumar (18) said they booked their tickets just hours ago to return to Koderma in Jharkhand, although they were considering returning home. since the cases started to increase.

Prasad, who runs a food stall in Noida, said closing workplaces in the area after employees started working from home barely allowed him to earn. “Last year I returned home on March 22. I returned to Delhi in December. Customers had started to return by then. But since the cases started to increase, people have stopped coming again, ”he said.

He said that although the second lockdown only lasts for a week, it will not return until the Covid cases fall in the capital. “Last year was a total waste,” he said.

Rahul Kumar, who works at his booth, said: “It’s not like we can work from home like these big companies. I had to borrow money to reserve this ticket. He said his parents and younger siblings depend on him to send money home. “My income is very important, how are we going to manage our families differently?” he said.