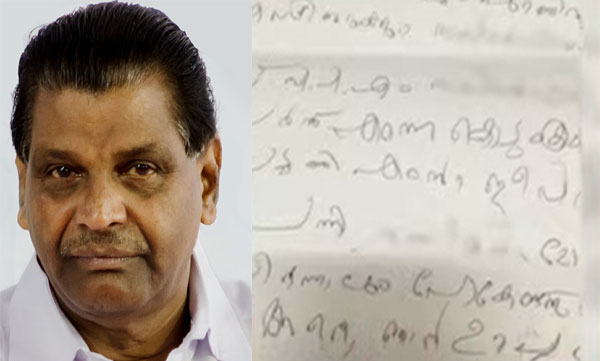 The accused in the TP Chandrasekharan murder case were caught by the investigation team while Thiruvanchoor was the Home Minister in the Oommen Chandy government.

The Opposition demanded immediate action on Thiruvanchoor’s complaint and a serious inquiry. The opposition also demanded that the threat be taken seriously and that security be provided to Thiruvanchoor. The Opposition also pointed out that it is suspected that TP Chandrasekharan was the culprit in the murder case. The jail is managed by these accused. Opposition leader VD Satheesan and KPCC president K Sudhakaran alleged that the accused were controlling the citation team, including the gold smuggling.

The criminals are unraveling under the CM’s nose. Even the criminals who attacked the employees of the Aegis office could not be caught. Thiruvanchoor, his wife and children have been threatened with death within 10 days. Defendants who are incarcerated or out on bail or parole. -VD Satheesan blamed.

The letter says, ‘You have lost my life and been stoned.’ K. Sudhakaran said that making such death threats is criminal. The silent statement makes it clear that it has nothing to do with the CPM. They also do not allege links with the CPM. It is not certain whether the accused in the TP case are the same. Sudhakaran, however, said that these were the main accused who were stoned to death when Thiruvanchoor was the Home Minister.

The accused in the TP Chandrasekharan murder case were caught by the investigation team while Thiruvanchoor was the Home Minister in the Oommen Chandy government.