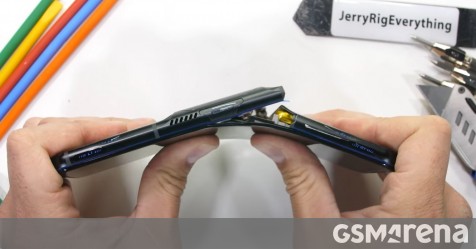 Remember the Asus ROG Phone 5 and how it snapped in half when put through the traditional flex test? Perhaps you had higher hopes for the Legion Duel 2 announced by Lenovo. Will this be the 2021 gaming phone that’s not only super gaming, but can withstand a serious twist as well?

Sorry but no. The Legion Duel 2 is sadly similar to the ROG Phone 5 in that it can’t take a bend. YouTuber Zack from JerryRigAll proves it in the video below.

Everything starts as expected, the screen glass is nothing fancy, scratching at level 6 on the Mohs hardness scale, with deeper grooves at level 7. The sides of the phone are metal, the pop-up The selfie camera has glass protection, just like the rear snappers.

The screen survives an open flame for about 33 seconds until the pixels start to get damaged and then never fully recover. It is also not unknown.

And then … it simply snaps in half when folded, much easier than the ROG Phone 5. The antenna lines on the sides are the weak spots, and they’re placed symmetrically on either side. which facilitates tearing. There are more antenna lines on the other side of the center camera hump, and of course, it’s easy to snap in there too. In the end, the phone is reduced to three parts. The front window, however, is still intact.

If you often carry your phone in the back pocket of your jeans and tend to forget it’s there and accidentally sit on it, you might want to avoid these two gaming phones.