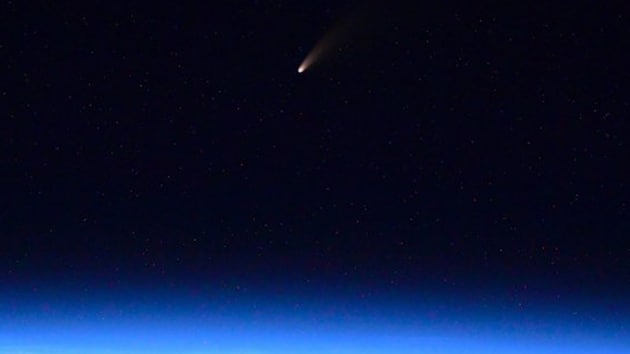 NASA astronaut Bob Behnken took pictures of Neowise while in Earth View and tweeted them from the ISS, describing them as “last night’s fireworks.”

This weekend was a treat for astronomy enthusiasts as the lucky ones managed to observe a comet crossing the sky.

Nicknamed Comet C / 2020 F3 or NEOWISE, it has been captured and shared by many astronauts, especially aboard the International Space Station (ISS).

NASA astronaut Bob Behnken took pictures of NEOWISE as he came in sight of Earth and tweeted them from the ISS, describing them as “last night’s fireworks.”

“Last night’s fireworks, for real. Because science, ”said Behnken’s tweet which was a collage of four images showing the bright comet near the Earth’s light curve.

Down on Earth, many sky watchers also shared their images of the comet. Astrophotographer Kerry-Ann Lecky Hepburn shared a stunning photo of the Toronto skyline.

Comet NEOWISE and the city of Toronto, Ontario, Canada 🍁! I was up very early for this shot. It is not often that we have the opportunity to see or photograph a comet of this brightness and with a tail. I hope you like it! 🤩 https://t.co/BFyxFFw2DE pic.twitter.com/sGZBiEVryM

The comet was discovered by NASA’s Near Earth Asteroid Wide-field Infrared Survey Explorer (NEOWISE) spacecraft on March 27, according to Astronomy dot com.

Right now, you need a good pair of binoculars to see comet NEOWISE in most places. But it is expected to dazzle throughout July around its closest approach to Earth, which takes place on July 22, according to an article in Space dot com.