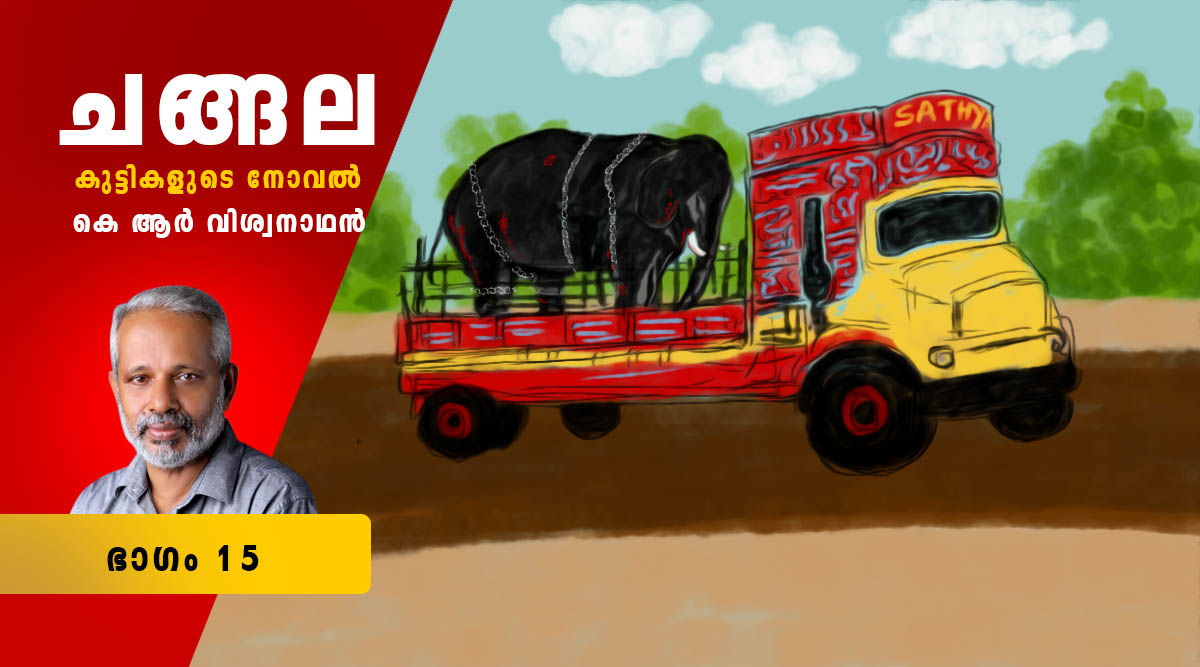 He said to the children with tears in their eyes. “I just asked the question you should have asked, and you could have said no. Could you lift at least a little finger? Has he thrown you out a lot? Could you have given back so much love? Couldn’t he have wanted that when he cried out in pain? ” The last part of the children’s novel chain written by KR Viswanathan

The group returns after a second search for the big horn that went wild.

Yet the children did not feel the need to go to the riverbank. Ashwathikutty was just crying. This time they did not go after hearing what Kuttisankaran had to say about the group that had gone to the forest.

Went on the boat at midnight. He did not know what was in the boat. But there was a smell of petrol coming from the boat. Kuttisankaran said the gun was wrapped in a sack.

He would put something in the mouth of the shot elephant and pour petrol on it. It doesn’t even look like the elephant’s life is gone.

The small horn is also added. Will call him one more time. The owner of the elephant once said that it was enough. This is the last chance for the big horn to come back.

”Look. The big horn will come back, ”Ashwathikutty asserted. She has prayed a lot for it.

When the little horn is called, the big horn will go along. He finds no companion in the forest. How long can you walk alone in the woods?

If anything, no one would come back in broad daylight.

Everyone walked to the river bank.

The owner of the elephant was also by the river. Yes. The big horn will return. Otherwise he would not have come to the river bank? There is no anger on his face now.

In the evening I started seeing people on the other side. Those who went in search of the elephant. Everyone was convinced that a big horn would suddenly appear behind them and a small horn on the elephant. The long awaited one did not happen.

Everyone got on the boat and decided when the boat left. No big deal this time around. He will not come again.

The first thing that came out of the boat was a small horn. He went downstairs. He walked away from the river without telling anyone.

Suddenly a roar came from the river bank. Orana is standing on the other side. It slowly descended into the river.

The big horn is coming.

The jeep stopped as it was about to leave. The owner and the team were in a hurry to say something back and forth. He pulled the sacks out of the jeep and threw them out. The sound of the chain coming down from the car was heard.

The big horn had already reached the middle of the river. Shouts also rose from the shore. More and more people began to reach the banks of the river. The poor tailor came with some fruit and jaggery in his hand. He was in great distress after the elephant climbed into the forest.

As the elephant approached the river bank, the applause and shouts became louder.

He comes slowly. Now he does not raise his head. He seemed to not even know what he was doing. He hesitated for a moment and then started walking again.

When the big horn hit the shore, the river became silent.

The big horn bowed its head like a flagrant criminal. A torn foreheadband hung over his ear. The water flowing through it is dripping like his tears.

The top of the big horn is torn. There was a black blood clot in the wound. A large wound in the stomach is bleeding from it. The tip of one of his horns is broken. Black, clothed on the other side.

A loud “horn” sound was heard. The little horn was crying. “You caught me, man.”

He slowly tried to raise his voice against the sound. But he could not lift even half. He has been wounded in the trunk and the flesh has been split in several places.

When the owner of the big horn approached, he knelt down. Horned in the soil. I have failed. At that moment the chain fell on him. He did not object to it. It remained there until the chain was finished. The forelegs were bent when the man came to get out. The man who came out with his forelegs lowered his forehead, which was stuck in his ear.

Someone downstairs was hunched over. The forelegs were also chained together.

The hind legs were fastened with sharpened iron bars. One of the elephants struck with a spear to see if the straps were tight. The big horn sank as the irons pierced the wound. A sickening cry rose from him. Looks like the elephant didn’t like it. He hit the iron bar again with the spear. He cried loudly inside. Yet a bamboo-like sound came out.

“For that” came a voice from the crowd. The river suddenly became silent. Everyone turned around. He is a doctor. The doctor’s voice rose again.

“What did he do wrong to do all this?” Why is he so chained? Did he bow his head? Why was the iron bar cut on his leg? Is he horned? Why did you hurt him again and again? ”

“Oh,” the elephant murmured, sticking his stick out again.

“Kneeling creature, don’t touch it anymore.” Such a loud voice is the first thing people hear from a doctor.

“Touch? A heavy noise was heard. Is the owner of the elephant.

There was no reply.

The big horn tried to look back. Behind him stands a group of his friends.

I heard the sound of falling on the iron bar tied to my feet. His body curled up unknowingly. Next step. The thorns grow on the flesh. He raised his trunk. One began to cry. The trunk sank with pain.

He walked slowly. He was skeptical of the next blow, not knowing how to walk, as the chains on his legs were tied back and forth.

Then a spear pierced the iron bar from behind. He could not even put his feet together.

The little horned elephant folded his hand towards the owner and said, “I can carry it anywhere. Just untie the chains on his legs.”

No one has heard.

As he was loading the big horn into the lorry parked on the riverbank, four blows fell on his body again. He could not obey the elephants with his chained body.

Unable to bear it, the big horn screamed loudly. Even the cries of captive elephants seemed disobedient to the elephants.

Again the mob hurts him. The big horn became silent.

“Don’t bother him anymore,” Vaidyar shouted in a voice that could be heard. There was no result. Vaidyar stepped back.

He said to the children with tears in their eyes, “I just asked the question you should have asked, and you could have said no.” Could you lift at least a little finger? Has he thrown you out a lot? Could you have given back so much love? Couldn’t he have wanted that when he cried out in pain? ”

Suddenly there was a cry from the children. The big horn had already gotten into the lorry. Lori stretched out and blew a horn.

The big horn tried to look back as the lorry began to move forward. Slowly the trunk lifted. As long as he can. Who did he travel with? Sometimes with friends crying on the riverbank. Maybe to the doctor who said a word for him. Or to a distant forest.