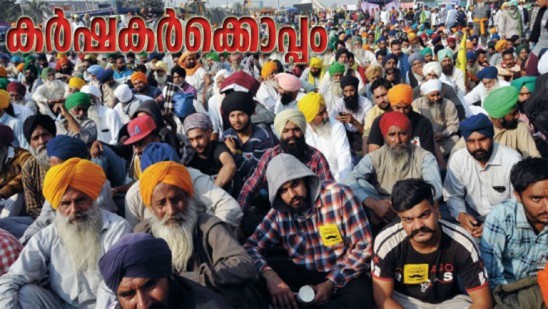 Thiruvananthapuram
Kerala’s solidarity with the peasant fighters fighting for the future of India on the streets of Delhi in the bitter cold. The Kerala Legislative Assembly unanimously passed a resolution calling for the repeal of the anti-farmer laws of the Central Government and in support of the agitating farmers. The resolution was passed at a special assembly meeting on Thursday morning. Chief Minister Pinarayi Vijayan presented the resolution at the conference which followed the Kovid protocol. BJP member O Rajagopal did not oppose the resolution.

The resolution said that while the new agricultural law was causing great concern and suspicion among the people affected by it, the legislatures had an obligation to consider it. Agricultural reforms need to be implemented carefully. Kerala is the state which has successfully implemented the Land Reforms Act. With the support of local and co-operative institutions, excellent interventions have been made to resolve the crisis in the agricultural sector.

The Central Government should have prepared for detailed consultations on this issue as it is an issue directly affecting the State. The resolution pointed out that these important laws were passed in a hurry without even being sent to the Parliamentary Standing Committee for consideration.

KC Joseph from the Opposition introduced three amendments. The CM said that an amendment could be adopted in this regard and the rest were in the resolution in a different way. KC Joseph demanded that the House adopt his amendment, “The Church protests against the Prime Minister’s negative attitude towards the peasant struggle.” The Chief Minister replied that since the Central Government is headed by the Prime Minister, there is no need to mention the Prime Minister. The House unanimously rejected the amendment. Subsequently, the House unanimously passed the resolution.

The agitation will affect Kerala as well

The resolution pointed out that if the farmers’ agitation continues, it will seriously affect Kerala. If the supply of food items stops, Kerala will go hungry. Great willpower is behind this protest. Farmers are worried that they will lose even the current support price for food grains. Bargaining power will be very weak in front of corporates. The law does not provide for legal protection for farmers. Farmers do not have the capacity to wage legal battles with corporates for this. We need a system where the products are procured by the Central Government and distributed to the needy at fair prices. Instead, the new law will allow corporates to take over the entire trade in agricultural products, the resolution said.

O Rajagopal did not object

The BJP leadership needs to make its position clear

CPI (M) general secretary Sitaram Yechury said the BJP leadership should state its position on O Rajagopal’s support in the Kerala Legislative Assembly for a resolution against the Centre’s agricultural laws. Disagreements within the BJP over agricultural laws are growing. There are problems in the NDA too. Many constituents are leaving the NDA. In Haryana, the BJP suffered a setback in the municipal elections. We applaud the action of the Kerala Legislative Assembly in passing the resolution unanimously against the Agricultural Laws. All three new laws are a danger to farmers. Yechury said the CPI (M) was with the farmers.