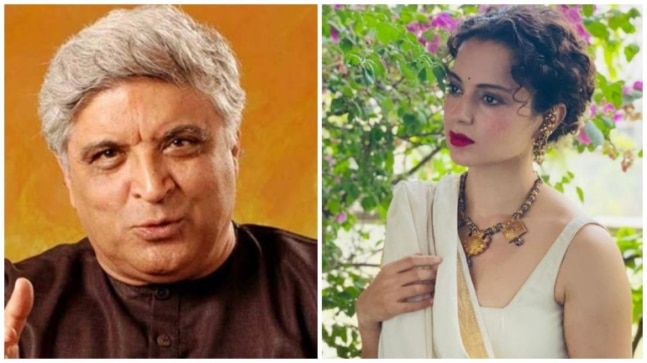 Bollywood lyricist Javed Akhtar claimed that Kangana Ranaut deliberately made a misleading statement in the Bombay High Court in order to obtain a favorable order for the renewal of his passport. Kangana’s passport renewal process had previously been rejected on the grounds of FIR (first information report) against her, however, her lawyer claimed that there was no criminal case arising from it. Meanwhile, Javed Akhtar had previously filed a lawsuit against Kangana for allegedly defaming him on national television.

Javed Akhtar’s claim, filed through attorney Jay Bharadwaj, seeks to intervene to point out to the court that Kangana’s statement was false, misleading and was allegedly made with the intention of obtaining a favorable order. His request specifies that the actress should have brought the position of fact before the Court, especially since she was in perfect knowledge of the factum of the criminal case filed by him against her.

Javed Akhtar has also filed a request to intervene, seeking to participate in the proceedings of a motion for brief filed by Ranaut challenging the First Information Report (FIR) filed against her for allegedly infringing the copyright of the book. Didda: Warrior Queen of Kashmir. Earlier this year, the actress announced on social media that her production house would be directing the film which is the sequel to her 2019 film Manikarnika: The Queen of Jhansi. The author of the book, Ashish Kaul, appealed to the court for copyright infringement by the actress. The hearing of the case will take place on July 9.

ALL ABOUT THE KANGANA RANAUT PASSPORT APPLICATION FILE

Kangana Ranaut had filed a provisional application as part of the Brief Motion seeking directions from the Regional Passport Authority, Mumbai, which reportedly raised objections to issue her a passport as she had FIRs against her. During the hearing of that claim last week, the actress’ attorney, Rizwan Siddiquee, told the court that no criminal case was pending against her in any court for two FIRs. One was recorded in connection with his tweets allegedly promoting religious enmity and the second relating to Didda’s copyright infringement case. The actress had appealed to the High Court on the grounds that the passport authority verbally raised objections to the renewal of her passport.

Based on this statement, the passport authority assured the court that Kangana’s passport renewal application would be considered as soon as possible. In fact, she recently renewed her passport.

Javed Akhtar has filed a defamation complaint against Kangana Ranut’s statements against him in an interview with a news channel. In the interview, she alleged that some senior members of Bollywood, including Javed Akhtar, were part of a “gang” that worked against foreigners trying to enter the industry. Kangana’s lawyer Rizwan had said he would challenge the entire Magistrate Court process to a higher court.

Javed said in his petition that the magistrate issued a notice to the actress in February 2021 and that if he failed to appear in court, he also issued a bail warrant in March 2021.