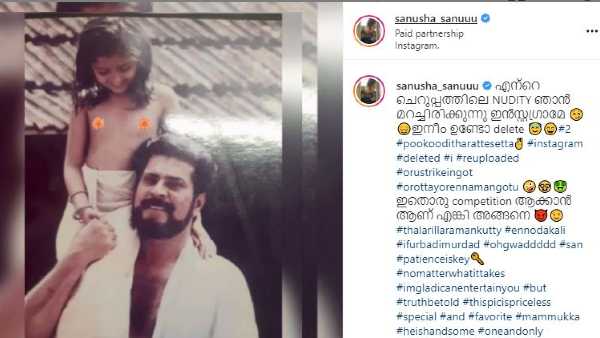 Sanusha made her film debut in Mammootty’s double role in Dada Sahib. Sanusha shared a picture taken with Mammootty on the set of the movie on Instagram. Sanusha is sitting on Mammootty’s shoulder.

Sanusha, a small child, is sitting on Mammootty’s shoulder wearing only a shorts. But this image is against the communist standard of Instagram. The reason is that Kunju Sanusha is not wearing an overcoat! So they deleted the image.

But Sanusha was not ready to give up. Sanusha re-posted the picture after editing and adding two small flowers to the problem area on Instagram. In doing so, Instagram did not seem to have a problem.

‘The nudity of my youth I was talking about was Instagram. Delete any more. If this is to be a competition, then so be it. ‘ Anyway, at least I didn’t go down without explaining myself first.

This is not just a post and photo, it’s Sanusha’s Instagram post. It’s also rich in hashtags. Hashtags like ‘Give me two more flowers, Satta’, ‘One stroke here, one one there’, ‘Talarilla Ramankutty’, ‘Play with me’, ‘If you are bad I am your dad’ …

From child star to heroine

Sanusha’s acting career started with TV serials. He later appeared on the silver screen in the film Dada Sahib. Sanusha has twice won the State Film Award for Best Child Actress. He also once received a special award from the jury. She made her Malayalam film debut with Dileep’s Marumakan ‘directed by Sandhyamohan.