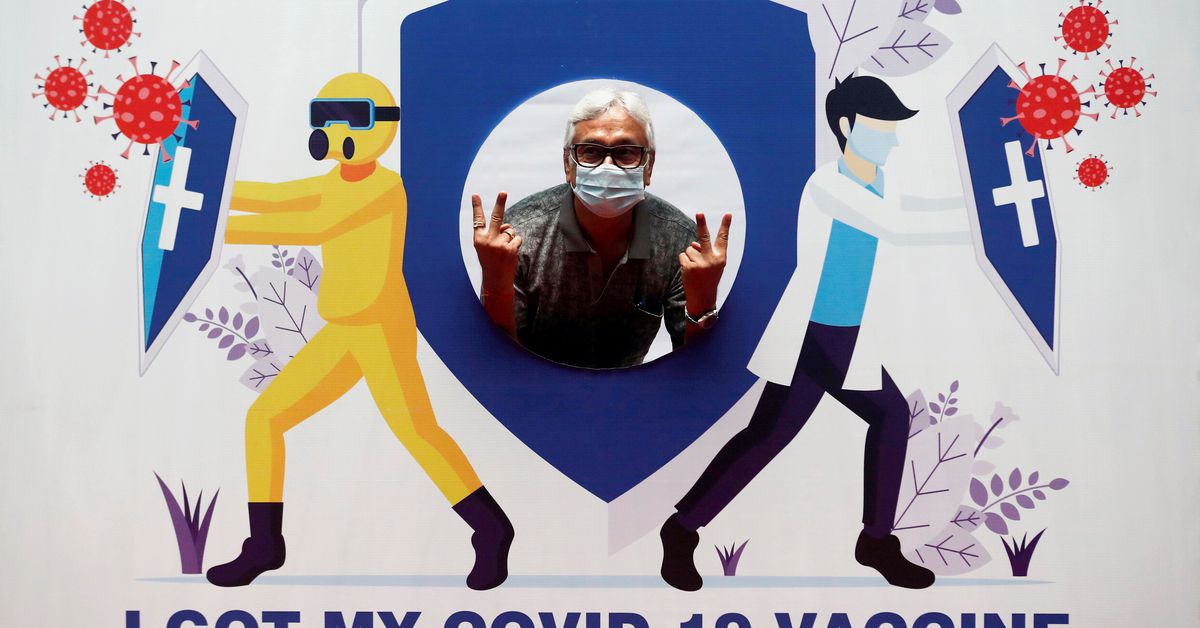 A man poses for a photo with a cardboard cutout after receiving a dose of COVISHIELD, a COVID-19 vaccine made by the Serum Institute of India, at a vaccination center, during the second wave of vaccination for elderly people suffering comorbidities, amid the spread of coronavirus disease (COVID-19) in Mumbai, India, March 10, 2021. REUTERS / Francis Mascarenhas / Files

Under fire for his handling of the world’s worst COVID-19 outbreak, Indian Prime Minister Narendra Modi has opened vaccinations for all adults starting next month, but stocks are already depleted.

Public forecasts from its only two vaccine producers show that their total monthly output of 70 to 80 million doses will only increase in two months or more, although the number of people eligible for vaccines will double to 800 million as of today. May 1.

Imports from Russia have also been delayed. India could only start receiving the Sputnik V vaccine at the end of May, local distributor Dr Reddy’s Laboratories (REDY.NS) told Reuters at least a month later than New Delhi. Read more

It could lead to chaos in inoculation centers – and possibly help the virus spread further – as people horrified by COVID-19 patients’ struggle for hospital beds and medical oxygen rush to seek immunity, government officials are warning privately.

India has the largest vaccine manufacturing capacity in the world, but has decided to delay major exports for now to focus on its own needs. Read more

Yet supplies are already running out, even for currently priority recipients over 45.

“Eligibility does not guarantee availability,” said a senior government official who declined to be identified.

“There is concern that the whole infrastructure will collapse, but at this point all channels are open to increase supplies from other countries … India needs a lot of help to cope with this crisis. “

India is currently administering around 3 million doses per day, above the daily production of around 2.5 million and using existing stocks to fill the gap. Many states have reported that they are out of stock.

Another government official said of the vaccination outlook: “(There will be) nothing dramatic by May, but more cases and deaths.”

India on Thursday recorded the world’s highest daily number of infections with 314,835 infections, bringing its total to nearly 16 million, of which around 185,000 have died. Read more

The health ministry did not immediately respond to a request for comment on the vaccines.

India has also urged Pfizer (PFE.N), Moderna (MRNA.O) and Johnson and Johnson (JNJ.N) to provide it with vaccines. Pfizer said it was speaking to the government, while J&J requested permission to do a small local trial but did not plan to sell it. Moderna did not comment.

Of the three, only J&J has a local production partner.

At the current rate of vaccination, using the AstraZeneca vaccine (AZN.L) and local Covaxin, it will take India more than two years to cover 70% of its 1.35 billion people, said Ramanan Laxminarayan, founder of the Center for Disease Dynamics, Economics and Politics in Washington and New Delhi.

“India must produce at least 12 million doses for its own consumption each day,” he said.

It has administered more than 131 million doses to date, the highest in the world after the United States and China. However, this figure is lower than that of many richer countries per capita.

While India initially struggled with public reluctance to vaccines, which in part led it to export millions of doses, the situation is now completely opposite.

“Hundreds of people come to get vaccinated, but every day they hand out only 100 vouchers due to a limited supply,” said Santosh Pardeshi, 45, who runs a laundry in the western district of Satara.

“I didn’t get a coupon on the first day, so the next day I got to the center at 6 am, stood in line for five hours, and managed to get my first dose.”

A senior health official from Satara said the district had the capacity to administer 50,000 doses per day, but supplies were only half.

“All the vaccination centers are now crowded and in some places people are tired of queuing and starting to argue with our staff,” said the official, who declined to be identified for speaking without the authorization from his superiors.

“The crowds will increase further from May 1 … unless they increase supplies, it would be difficult to manage the crowds. We may need to get help from the police.”