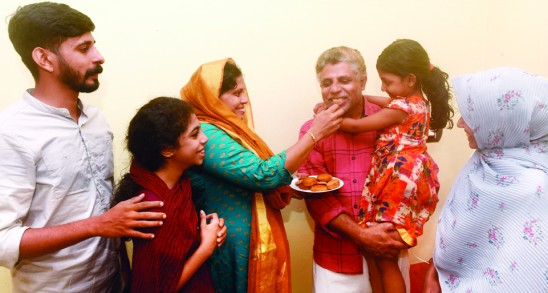 Home in Panthalloor Mudikotte Madaripalliyali in the excitement of the Tokyo Olympics. The family has been on the track of joy since the news broke that MP Jabir has qualified for the Olympics in the 400m hurdles‌. Uppa and Umma are proud that their son has surpassed the sky of dreams after hard work.

Uppa MP Hamza said that the recognition received for Jabir’s tireless struggle is a dream come true for the family and the Malayalees. Jabir was a seventh grader at Panthalloor Higher Secondary School when he sparkled on the track. Success in district and state competitions in subsequent years. While studying at Thavanur Kelappaji Memorial School, he stepped into hurdles. The latter did not miss the target. Became India’s star for the best time in international competitions. She qualified for the Olympics by finishing in 49.78 seconds in the 400m hurdles at the Inter-State Athletics Championships in Patiala.

According to Umma KM Sharina, Jabir’s perseverance and hard training have helped him to succeed. K Mohammad Nawaz, a sports teacher at Kallidikode School, recalls that Jabir, who attended a reception given by KT Irfan in Malappuram after returning from the 2012 Olympics, said that he too would participate in the Olympics.

His sister Jasna was also an athlete. He represented Malappuram district several times in school meetings. Another sister, Jebin, is a sixth-grader. Jabir Patiala, an Indian Navy officer, has been training at the International Sports Institute for three months.