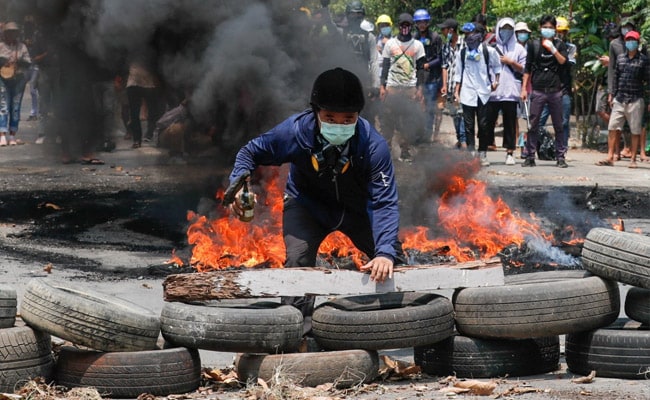 The spasm of violence came as the junta staged a large show of force for its annual Armed Forces Day.

On Sunday, defense chiefs from a dozen countries jointly condemned the bloodbath in Myanmar the day before, in which at least 90 people – including several children – were killed after security forces opened fire on protesters.

The newly imposed junta staged a big show of power for its annual armed forces day on Saturday, as the death toll since the February 1 coup rose to at least 423, according to a local watch group.

Defense ministers from 12 countries, including the United States, Britain, Japan and Australia, on Sunday condemned the use of lethal force by the Burmese military against civilians.

“A professional army follows international standards of conduct and is responsible for protecting – not harming – the people it serves,” the rare joint statement read.

“We urge the Myanmar armed forces to end the violence and work to restore respect and credibility to the people of Myanmar whom they have lost because of their actions.”

Mourners were due to attend funeral processions across the country on Sunday, after the bloodiest day since the putsch.

In the capital Naypyidaw on Saturday, there was a large parade of troops and military vehicles, and junta leader General Min Aung Hlaing warned in a speech that acts of “terrorism” were unacceptable.

Violence erupted across the country, with the military using live ammunition in more than 40 townships in nine regions, including the largest city of Yangon, the local monitoring group Assistance Association for Political Prisonniers (AAPP) said.

As the sun set, it was the deadliest day since the junta took power, with the AAPP saying at least 90 people had been killed.

“Junta forces fired machine guns at residential areas, killing many civilians, including six children between the ages of ten and sixteen,” AAPP said.

“The fact that the illegitimate military regime targets children is a serious act of inhumanity.”

A journalist from Kyeikhto County in Mon state was shot dead and injured his leg, AAPP said.

– “ Harmful for the tranquility of the State ” –

Min Aung Hlaing again defended the coup and pledged to hand over power after new elections during his parade speech on Saturday.

But he also threatened the anti-coup movement, warning that acts of “terrorism which can undermine the peace and security of the state” were unacceptable.

“The democracy we want would be unruly if they did not respect and violate the law,” he said.

Armed Forces Day commemorates the onset of local resistance to Japanese occupation during WWII and typically includes a military parade in which foreign military officers and diplomats participate.

The junta announced that eight international delegations attended Saturday’s event, including those from China and Russia – with a state media broadcast showing Russian Deputy Defense Minister Alexander Fomin in the ‘audience.

Meanwhile, rebels in eastern Myanmar said they were the target of airstrikes on Saturday evening, hours after the rebel group seized a military base.

The move marked the first such air assault since the army took power against the Fifth Brigade of the Karen National Union (KNU) – one of the largest armed groups in the country, which claims to represent the Karen people.

The junta did not immediately comment and there has been no official confirmation of any victims.