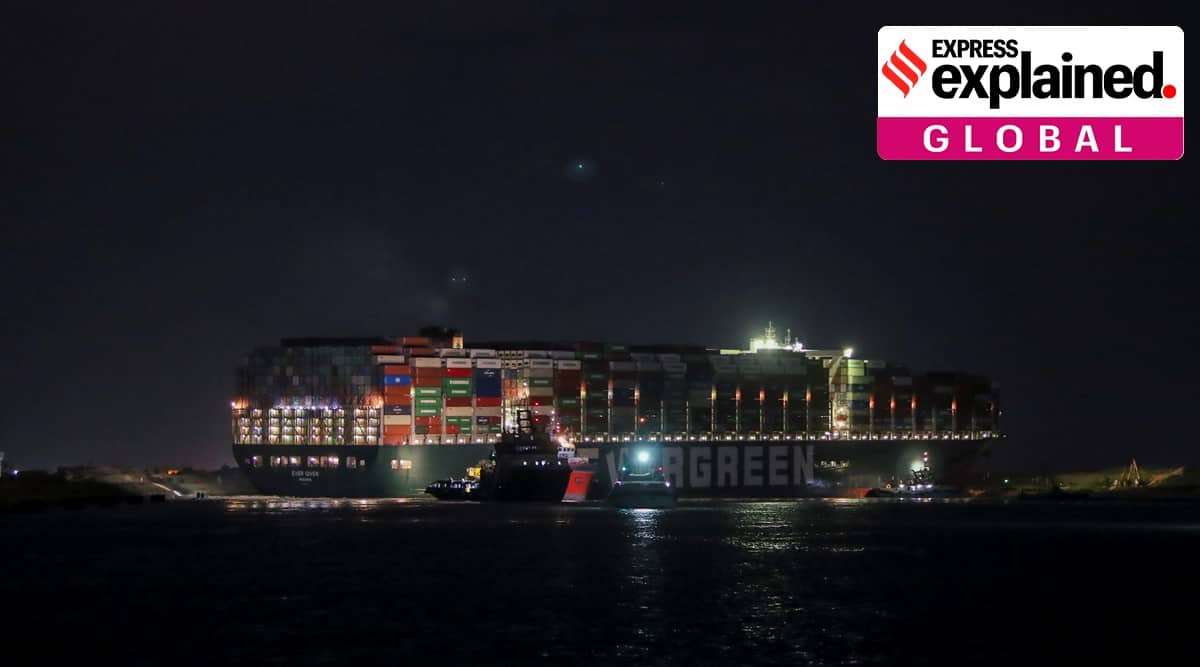 The forecast for Tuesday March 23 showed wind gusts of over 40 miles per hour and sandstorms sweeping through northern Egypt. Indeed, such weather is common in the Sinai Desert at this time of year.

the Suez Canal– one of the most critical and precarious waterways on the planet – has remained open. The ships began to form the daily convoy as the gusts increased. One of the largest container ships in the world, the Ever Given, joined it. The decision would have repercussions globally in a few hours.

Newsletter | Click for today’s Best Explanations to your inbox

At 7.40 a.m. local time, the megaship – loaded with containers over 120 kilometers (75 miles) long and carrying everything from frozen fish to furniture –was stuck. Its grounding would not only expose the intricacies of navigating an artificial trench in a ship the size of the Eiffel Tower, but also the fragility of a global network of markets and economies that take the flow of goods for granted. through her. .

Based on tracking data and dozens of interviews with people in the industry, what is known is that Ever Given began to cross the 300-meter-wide canal, while ‘at least one other ship decided to hold on because of the high winds. The Ever Given also did not use tugs, according to two people familiar with the situation, while the two slightly smaller container ships just ahead did.

Then there was the question of how fast it was going. When the ship began to move towards the sand, it appeared to accelerate, perhaps to correct itself, although it was too late and almost hit the shore. This then served to wedge the steel hull deeper into the side of the canal. The gusts are also said to have worsened what captains consider one of the most difficult water crossings in the world.

“You are ready for breathtaking rides,” said Andrew Kinsey, a former captain who sailed a 300-meter freighter through the Suez and is now a senior marine risk consultant at Allianz Global Corporate & Specialty. “It’s such a small canal, the winds are very strong and you have a very small margin for error and big consequences if any errors occur.”

It was not a situation where you couldn’t sail, even though the wind was strong enough to close the nearby ports. Some vessels used tugs or other assistance, others simply passed without incident.

A Yang Ming freighter is anchored outside the Suez Canal, where a container ship has run aground and blocked traffic, in Ismailia

However, at least one ship decided to delay the journey through the canal. The day before Ever Given’s grounding, the Rasheeda was among the ships approaching the canal from the southern end. Aware of the dangers of the coming sandstorm and loaded with liquefied natural gas from Qatar, the captain decided not to enter the canal after speaking with other officials from Royal Dutch Shell Plc, which manages the vessel, according to two people close to the situation.

The Suez Canal Authority said a lack of visibility in bad weather caused the vessel to lose control and drift. He did not comment further. Taiwan-based Evergreen Line, the vessel’s time charterer, said by email that the Ever Given “was accidentally stranded after deviating from course due to a suspected sudden high wind.”

The ship’s manager, Benhard Schulte Shipmanagement, said initial investigations suggested the accident was due to the wind. An in-depth investigation involving several agencies and parties is underway. It will include talks with the pilots on board and all bridge personnel and other crew members, a company spokesperson said.

Meanwhile, the channel remains blocked and the latest reports from people familiar with the rescue efforts suggest it will take at least until Wednesday.

A channel for 12% of world trade, an average of 50 ships pass through Suez each day in convoys that leave early in the morning. The Ever Given began its journey shortly after dawn and took on two local pilots from the Suez Canal Authority. They come on board to supervise the vessels making the voyage on the waterway which can take up to 12 hours. But the authority’s navigation rules clearly state that the captain, owners and charterers remain responsible for accidents.

According to a former crew member, the Ever Given captain overseeing the bridge had already made the trip across the Suez several times and handled it in gusty winds. Shipping companies say they are using their senior captains for Suez due to the sensitive nature of the trip.

But what happened next left $ 10 billion in cargo with nowhere to go with more than 300 ships carrying products across multiple industries now stuck at a standstill.

Why is a canal built in 1869 more important than ever?

Ever Given lost her bearing and began to turn to her starboard side about 5 miles into the mouth of the canal. The 200,000-ton vessel then streamlined to port, then quickly shifted sideways and grounded, her bulbous red bow jutting out to effectively cut through the water firmly anchored in the sandy embankment.

“Here we only have one ship that is out of place and yet has an impact on the entire maritime and global economy,” said Ian Ralby, Managing Director of IR Consilium , a maritime and security law firm that works with governments. “This ship – carrying exactly the kinds of things we rely on day to day – shows that the supply chains we rely on are so integrated and the margin for error is so slim.”

Those who put together what caused the crash will no doubt watch the speed. The vessel’s last known speed was 13.5 knots at 7:28 a.m., 12 minutes before the grounding, according to Bloomberg data.

This would have exceeded the speed limit of about 7.6 knots (8.7 miles per hour) to 8.6 knots which is listed as the maximum speed that ships are “allowed to transit” through the canal, according to the Suez Authority’s navigation rules manual posted on its website. The captains interviewed for this story said that it may pay off to increase speed in a strong wind to better maneuver the vessel.

The map shows what authorities will need to do to move the Ever Given vessel from the Suez Canal.

“Speeding up to a point is effective,” said Chris Gillard, who was captain of a 300-meter container ship that crossed the Suez monthly for almost a decade until 2019. “More than that and it becomes counter-effective because the bow will. get sucked deep into the water. Then adding too much power only exacerbates the problem. “

Bloomberg data also shows that the 300-meter Maersk Denver traveling behind Ever Given also posted a top speed of 10.6 knots at 7:28 a.m. A Maersk spokesperson in Denmark declined to comment. Ship captains and local pilots said it was not unusual to cross the canal at this speed despite the lower limit.

The Cosco Galaxy, a slightly smaller container ship than the Ever Given, was immediately ahead and appears to have traveled at a similar speed, but with a tugboat. The one before the Cosco, the Al Nasriyah, also had an escort. Escorts are not mandatory, according to the Suez Authority’s navigation rules, although the authority may require it for ships if it deems it necessary.

“The larger vessels often travel with a tugboat in the immediate vicinity, an escort boat, to facilitate transit,” said Captain Theologos Gampierakis of the commodities trading house Trafigura Group in Athens.

A freighter with high stacked containers like the Ever Given can be particularly difficult to navigate since the ship’s hull and container walls can act like a huge sail, said Kinsey, the former captain, who made his last voyage. at Suez in 2006.

“You might find yourself positioning the ship in one direction, and you’re actually moving in another direction,” Kinsey said. “There is a very fine line between having enough speed to maneuver and not having too much speed for the air and hydrodynamics to become unstable. Any deviation can get really bad really quickly because it’s so tight. “

About 20 minutes after the incident, the first of two tugs accompanying the ships in front of the Ever Given returned to push its port side in an attempt to dislodge it, according to data compiled by Bloomberg. Eight tugs were later deployed to push both sides of the container ship, but to no avail.

The stranded container ship Ever Given, one of the world’s largest container ships, is seen after running aground in the Suez Canal, Egypt (Reuters)

In the field, officials and investigators were sent to the embankment. The excavators tried to make a dent by helping to free it from the sandy embankment.

In a village 100 meters from the stuck ship, the ship looms on the skyline like a giant monument. Every day it is found it is even more difficult to get it out, due to the sediment carried by the currents that will pile up around the ship underwater, Kinsey said.