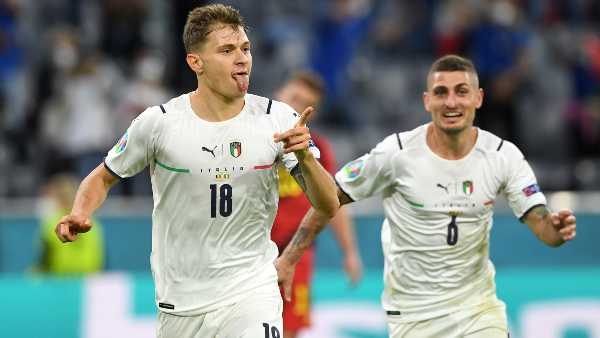 Italy had a slight lead in the match. They lagged behind Belgium in ball possession and passing. Both teams played an attacking game together. With this, the ball went up and down in both the boxes with the blink of an eye.

In the 13th minute, Italy got the ball into the net of Belgium through Leonardo Benucci. It was at the end of Insini’s freekick. Belgium missed a cross from the right wing that crossed the box. With this, Bonucci hit the ball into the net with his chest from near the second post. But the referee called offside to seek the VR’s help. This was when it became clear that Bonucci and teammate Lorenzo were in an offside position while bowling.

In the 23rd minute, Donaruma’s eye-catching save was denied to Belgium. At the end of the counter-attack, De Bruyne flew with the ball and a shot from close range into the box was deflected into the air by Donaruma. Within three minutes, Donaruma was once again Italy’s savior. Again, a counter-attack put pressure on Italy. Donaruma dived into the box on the right wing with dance steps and Lukaku dived into the second post, where he dived with one hand.

Italy took the lead in the 31st minute. It was from the fall of the Belgian defense. The ball cleared by Vertonghen landed at Verratti’s feet. Barela went into the box on the right wing with a ball from Verratti, but the shot from between the three Belgian players hit the left corner of the net without giving any chance to the goalie.

In the 44th minute, Inzini made it 2-0. It was also a beautiful goal. Incini Bogax, who flew to the left wing with the ball, fired a shot past the Belgian players from close range, but the goalie Kotwa was also caught in the net.

Belgium scored the first goal in the next minute. It was from the penalty. This was after DeLorenzo fouled Belgium’s doc inside the box as he tried to cut into the box with the ball through the left wing. The referee sought the VAR’s help and reaffirmed that the penalty was the same. Lukaku easily converted a penalty.

Italy had the upper hand in the second half as well. Belgium continued the fast-paced counter-attacking game. In the 61st minute, Lukaku squandered a golden opportunity to bring Belgium together. Lukaku only had the role to cut through the left wing and into the cross net provided by De Bruyne. But when Lukaku’s timing failed, the ball was blocked by Italian defender Spinoza’s foot.

Belgium scored another goal in the 71st minute. Substitute Chadli tried to score with a beautiful cross from the left wing across the box through a close range header but could not connect. Thorgan Hazard, who was close to the second post, also missed the ball.