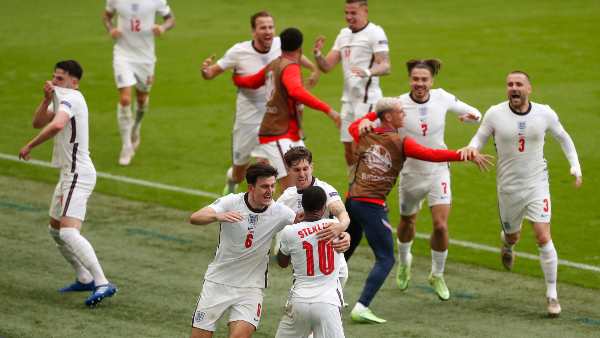 England’s opponents in the quarterfinals are the winners of the Sweden – Ukraine quarterfinals. For the first time in the last three Euro Cups, Germany has been eliminated from the semi – finals. It was also the last match of German coach Joachim Low. His contract with the team ended with the Euro Cup. Former Bayern Munich coach Hansie Flick has been named in the squad.

The match started with Germany’s advances. English goalkeeper Pickford had to make the first save in the fifth minute. Tested by Goroska Longranger. But Pickford was failing at this. England did not have much of a chance to touch the ball in the first 10 minutes. But slowly England came back into the match. In the 16th minute, they shook the German goal face for the first time through Raheem Sterling. The German goalkeeper and captain, Nuer, dived and stabbed Sterling with a shot from 25 yards out. Then a corner kick to England. Trippier’s beautiful corner kick landed right on the head of English defender Maguire. But the header that Maguire tested tested went just above the crossbar.

England were then seen to be gripping the game. Germany, on the other hand, played defensive football. This prompted England to attack and play. Germany had a great chance to score from a counter attack in the 33rd minute. Werner only had to beat goalkeeper Pickford to get into the box with the ball provided by Howetz. But Werner’s left-footed close-range shot was blocked by Pickford.

England needed a 1-0 lead in the first half. But Germany barely escaped. Sterling jumped into the box with the ball on the left wing and was tackled by the Germans at the last minute. But the ball landed at Kane’s feet inside the box. Kane’s attempt to cut and shake Nuer, who fell to the ground, failed. Hummels’ amazing clearance just before the shot kept Germany from giving up the lead.

In the second half, Germany abandoned their defensive style and tried to play more aggressively. In the 49th minute, English goalkeeper Pickford’s eye-catching save prevented Germany from taking the lead. Howetz, who was unmarked inside the Goosens cross box from the left wing. The star’s broken left-footed volley had to be nailed to the roof of the net. But a Pickford fist flew through the air and hit the ball just above the crossbar.

England opened the scoring in the 75th minute at Wembley Stadium. Once again, Sterling is England’s hero. Sterling was the one who pulled the strings for the goal. Sterling turned the ball over to Kane from near the box. Kane passed the ball to Grelish, who was caught on the right wing. Afterwards Greilish Luke passed to the show. The show was measured from the left wing and placed into the net with a cross sterling close range shot.

When Thomas Mുള്ളller missed an open goal in the 81st minute to put Germany ahead, it was clear that luck was not with them. At the end of the counter attack, M മller jumped alone with the ball and only goalkeeper Pickford was in front. The moment when everyone confirmed that Germany was tied at 1-1. Mർller fired a shot into the back of the net without giving Picford a chance to touch it, but the England fans were left breathless as he went just wide of the post on the left post.

In the 86th minute, Germany’s hopes were dashed when England scored the winning goal through Kane. Caught with the ball provided by the show, the beautiful cross from the left wing and Grealish crossed the box and ran into the net with a smashing diving header. It was also Kane’s maiden goal in the tournament.