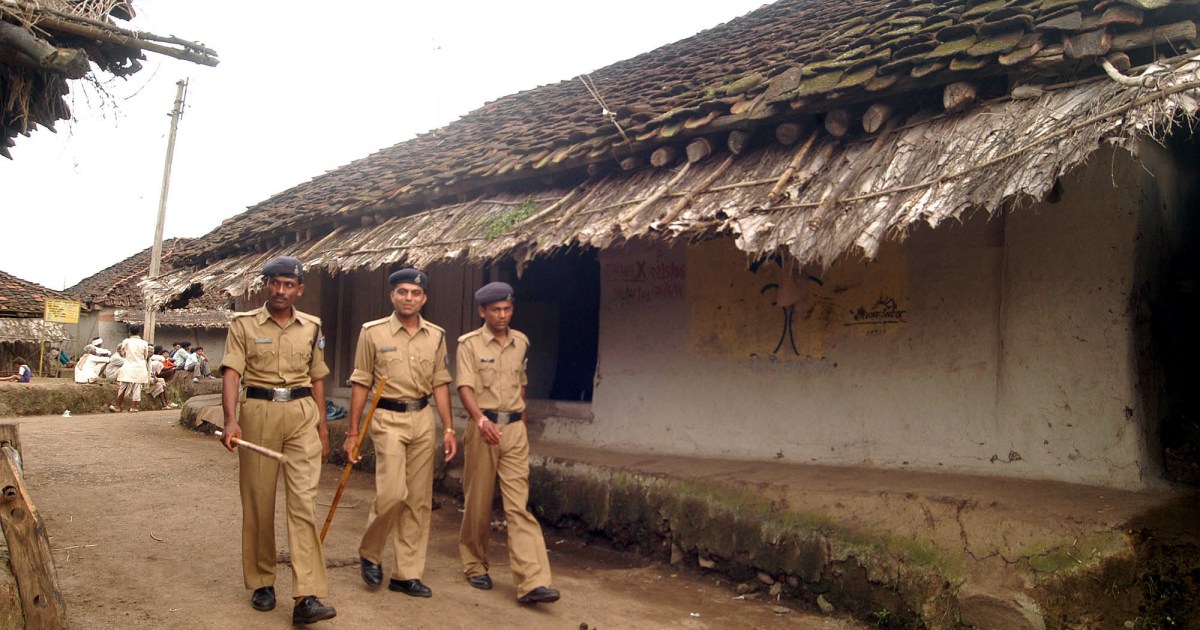 New Delhi and Bhopal, India – The situation remains tense in parts of Madhya Pradesh state in central India, days after community violence erupted in parts of the state ruled by the Bharatiya Janata Party (BJP).

Authorities imposed restrictions in parts of Mandsaur and Indore districts and arrested dozens of people in connection with the violence.

The tensions were reportedly sparked during rallies organized by right-wing Hindu groups to raise funds for the construction of a Ram temple in Ayodhya, in the northern state of Uttar Pradesh.

Clashes erupted in a Muslim-dominated village in the Indore district on Tuesday when members of Hindu groups participating in a rally stopped outside a mosque and chanted slogans while Muslims prayed inside, which caused violent incidents.

Video that has gone viral on social media shows a group of men – holding saffron flags and chanting ‘Jai Shri Ram’ (Hail Lord Ram) slogans – climbed to the top of the mosque and attempted to damage a minaret in the presence of the police.

“The incident was shameful and a team was formed to identify the attackers,” Inspector General of Police Yogesh Deshmukh told Al Jazeera.

“Compared to the crowd, the police force was smaller and failed to control the situation,” he said.

Deshmukh said, regarding the involvement of the police in the incident, “we are investigating and if we find substantial evidence or video, we will take strict action.”

He said 29 people had been arrested so far in connection with the violence.

The incident came just three days after similar clashes erupted elsewhere in the state, in the Muslim-dominated Begum Bagh neighborhood of Ujjain, when a rally of the BJP youth wing, Bharatiya Janata Yuva Morcha (BJYM), in the area, caused the throwing of stones.

The first incident was reported in Ujjain district of Madhya Pradesh on December 25, where members of BJYM organized a rally of motorcycles to raise funds for the Ayodhya Ram temple project.

A resident of Begum Bagh alleged that BJYM workers used a slogan when they abused certain residents by walking through a neighborhood several times during the day.

“They provoked the inhabitants by mistreating them. Dozens of bikers passed through the neighborhood several times a day and each time they made abusive comments about locals and commuters, ”said Khaliqur Rehman, a Muslim leader in Ujjain.

“The constant provocation led to unrest and stones were thrown on both sides and damaged many residents’ vehicles, their homes, as well as a clinic.

Meanwhile, on Tuesday, nearly 100 km from Chandanpur, in Dorana village in Mandsaur district, a mob allegedly attempted to vandalize a mosque minaret.

Police in the respective districts recorded reports against 100 people and nearly 50 people were arrested in total.

Several right-wing organizations have launched a fundraising campaign for the construction of the Ram Temple on the site of the 16th-century Babri Mosque which was demolished in 1992.

The mosque site was donated to a government-run trust for the construction of a Hindu temple by the Supreme Court of India, while the Muslims were allocated 2 hectares of land on another site for it. build a mosque.

Asaduddin Owaisi, leader of the opposition All India Majlis-e-Ittehadul Muslimeen party, accused the government on Wednesday of inciting its supporters.

“What steps has the government taken to de-radicalize these men? By enacting new laws relating to conversions and marriages, the [Prime Minister Narendra] The Modi government radicalizes members of the majority community.

Rajneesh Agrawal of the ruling BJP in Madhya Pradesh, however, said action would be taken against anyone who committed a crime, regardless of their religion.

“Our government is working under the rule of law and those who have been involved in violence and broken the law, action will be taken against those who are under the law,” Agrawal said.

“We will not allow anyone to break law and order, no one will be allowed to stir up community tensions in Madhya Pradesh and no one should play politics about it,” he added.

In February, when riots broke out in the districts of the Indian capital, New Delhi, several mosques were vandalized by the vigilantes of the Hindutva.

“A culture of impunity has now taken hold in India,” said Professor Apoorvanand of the University of Delhi, adding that “we will see an increase in these incidents in all states ruled by the BJP”.

“Crowds get an open license… they know nothing will happen to them,” he said.

“And [two] the administration brazenly sided with these crowds.