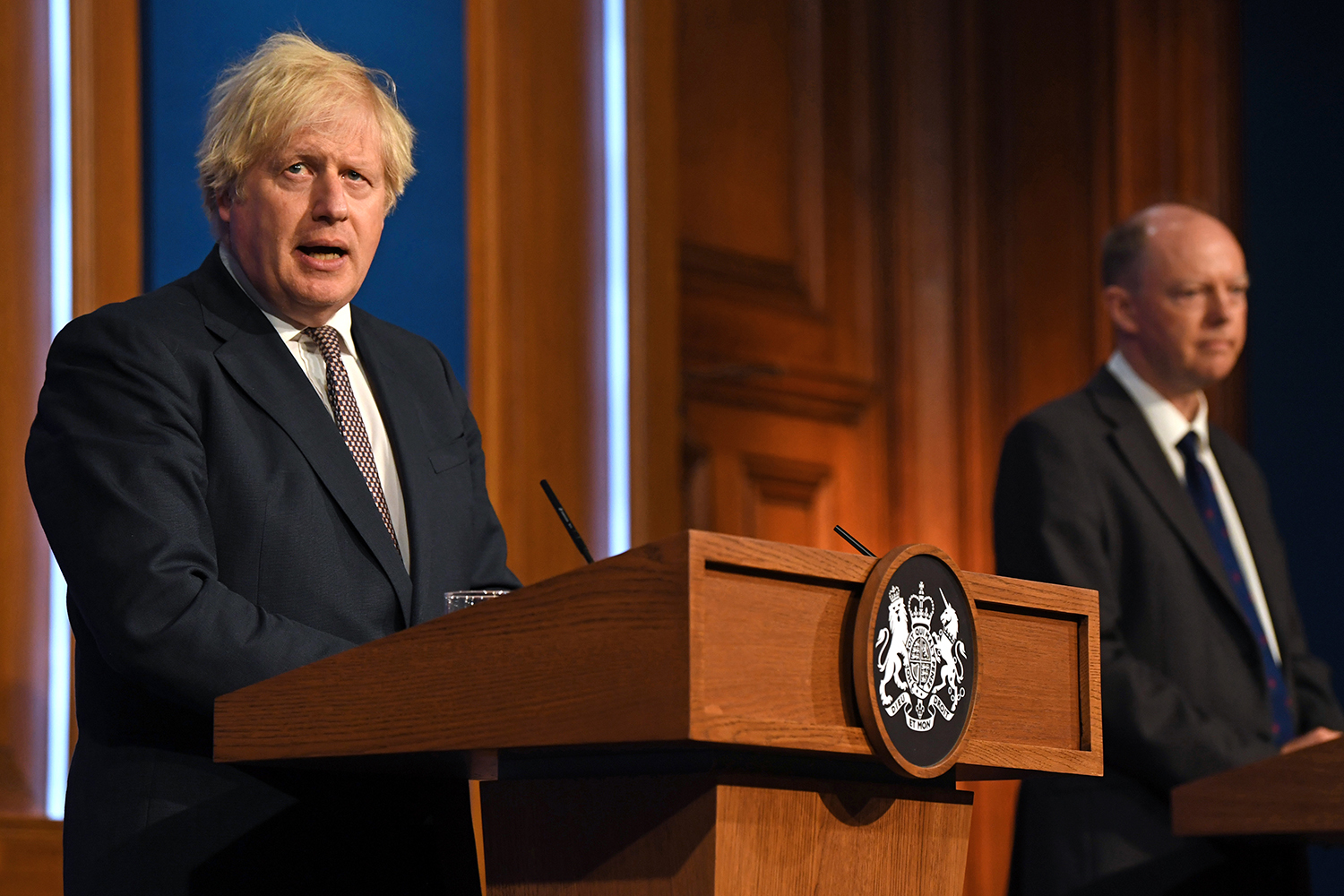 LAWS on social distancing and face masks will be removed in the final stage of Covid’s England lockdown roadmap, Boris Johnson has confirmed.

But, speaking at a press conference in Downing Street, the PM said now was not the time to be “happy demob” as he warned the battle against the coronavirus was “very far away “to be completed.

The so-called “freedom day” is expected on July 19, with the decision to go ahead or not made a week earlier.

Describing a number of restrictions to be relaxed, he said: “We will remove all legal limits on the number of indoor and outdoor meetings.

“We will allow the reopening of all businesses, including nightclubs.

“We will be lifting the limit on appointed visitors to nursing homes and the number of people attending concerts, plays and sporting events.

“We will end the one-meter-plus rule on social distancing and the legal requirement to wear a face covering, although guidance will suggest where you might choose to do so, especially when cases increase and when you come into contact with people you don’t know. normally meet in confined spaces such as conspicuously crowded public transport.

“It will no longer be necessary for the government to require people to work from home so that employers can start planning for a safe return to the workplace. ”

Officials have acknowledged that Covid-19 cases and deaths will continue to rise with a potential of 50,000 detected cases per day by July 19 – a level well below that before the vaccination program.

Mr Johnson described summer as a “firebreak” allowing a reopening now, rather than winter, which would be a “more difficult time” or delay until next year.

He said: “If we don’t move on now, then clearly we have done so much with the immunization program to break the link between infection and death.

“If we don’t move forward now as the summer firewall approaches, the school holidays, all the benefits that should give us in the fight against the virus, then the question is: ‘ when would we go forward? ‘. Especially considering the likelihood that the virus will have an added benefit during the colder months, in autumn and winter.

“So we run the risk of either opening up at a very difficult time when the virus has an advantage, has an advantage in the colder months, or even postponing everything until next year, so I think that will be a very balanced decision next week.

When asked if he would continue to wear a face mask, Mr Johnson said it “would depend on the circumstances”.

He said: “I think what we are trying to do is move from the universal diktat of the government to the personal responsibility of the people and there is clearly a big difference between traveling in a crowded subway and sitting late in it. at night in a practically empty car on the main railway line.

“So what we want to do is have people exercise their personal responsibility, but remember the value of face coverings to protect themselves and others. ”

While the legal requirement to self-isolate will remain for those who test positive or identified as contact by the NHS Test and Trace, Mr Johnson wants fully vaccinated contacts to be exempt and the government will provide more details in due course. .

Labor leader Sir Keir Starmer accused Boris Johnson of being ‘reckless’ in planning to remove all legal restrictions on coronaviruses at the same time and said the wearing of the mask should remain.

He said: “Lifting all the protections at once when the infection rate increases is unwise. A balanced approach, an appropriate plan, would say to keep the key protections.

“One of them would be masks in confined spaces and on public transport – this is a common sense position. More ventilation, which is happening in other countries, is an absolutely essential and appropriate payment for those who need to self-isolate. ”

As part of the Prime Minister’s plan for step 4 of the roadmap:

– There will be no limits on social contact, which means the end of orders such as the “rule of six” and restrictions on wedding guests and mourners at funerals.

– The legal requirement to wear face coverings will be lifted, although guidelines suggest that people may choose to do so in “confined and overcrowded places”.

– All remaining businesses will be able to reopen, including nightclubs, while capacity caps will be lifted and bars and restaurants will no longer be limited to table service.

– The government will no longer order people to work from home.

– The ‘one meter plus’ rule on social distancing will be lifted, except in specific circumstances such as at the border, where guidelines will remain to prevent passengers from Red and Orange List countries from mingling with other travelers.

– The limit on named visitors to nursing homes will be lifted, but infection control measures will remain in place.

– There will be no mandatory use of the certification of Covid status – so-called national vaccine passports – although companies can voluntarily use the system.

– The gap between vaccine doses for those under 40 will be reduced from 12 to 8 weeks, which means that all adults will have the opportunity to be doubled by mid-September.