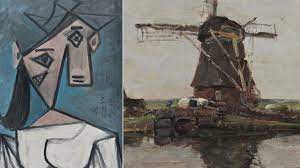 Discovered a rare painting by the legendary painter Pablo Picasso who was liberated years ago. A picture of a woman’s head that was lost during a rescue operation nine years ago has been found in the Athens National Gallery.

The museum had large security equipment and security staff. It took the thieves just seven minutes to cross them with the pictures. It was an event that garnered huge attention globally. The burglars could not be traced even after the investigation was announced. Meanwhile, Greek police said months ago that they believed the two images were in the country.

Picasso himself donated the paintings to the museum in 1949. The picture, painted ten years ago, also features Picasso’s signature. Picasso said at the time that he was presenting the film as a mark of respect for the Greek people’s resistance to the Nazis.