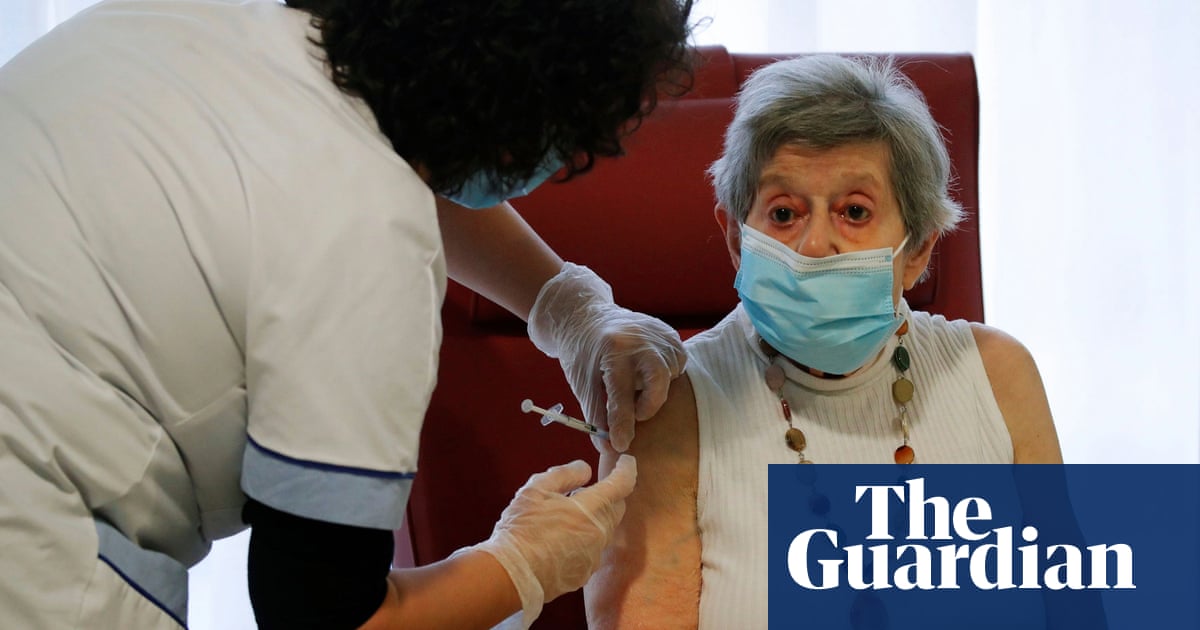 The French government has been accused of complying with anti-vaxxers after figures showed only a few hundred people had received a blow days after the country’s vaccination program began.

Health officials said France was preparing for “a marathon, not a sprint” and that they were making slow progress, in part because of the high level of public skepticism about the vaccine.

France started administering the Pfizer / BioNTech vaccine on Sunday, starting with staff and residents of nursing homes and people considered at risk of developing severe symptoms of the virus. It is the only country to insist that those offered the vaccine give their written consent after being informed of any contraindications.

However, less than 100 people were vaccinated in the first three days. As of Wednesday evening, only 332 people had received the vaccine, according to health ministry officials. The ministry said the goal was to vaccinate 1 million elderly and at-risk people by January, which would require more than 31,200 vaccinations per day.

Health Minister Olivier Véran admitted that France was vaccinating more slowly than other countries and suggested it was a deliberate policy to allow an information campaign rather than the result of a lack of vaccines or logistical failure.

“We have the same number of doses of vaccines as our German neighbors, we have the same objectives and we will have the same results,” Véran said on French television. “It takes time to take off… I don’t confuse speed and haste,” he added.

President Emmanuel Macron and ministers have promised the vaccine will not be mandatory and officials have assured the public that there will not be a compiled list of those who refuse to receive the Covid-19 vaccine. However, Macron said people should be guided by “reason and science”. “The vaccine is not compulsory. Trust our scientists and our doctors, ”he said.

In his New Years address Thursday, Macron vowed to avoid “unjustifiable delays” in vaccinations, but also took a defensive note, saying he would not let “anyone play it safe” from the campaign.

Axel Kahn, a prominent geneticist and head of the National Cancer League, told Europe 1 radio that France’s vaccination strategy was wrong. “It’s not suitable for such a dangerous situation,” he said.

Philippe Juvin, head of the emergency department at the Georges-Pompidou hospital in Paris, agrees. “As an individual I would like to be vaccinated to lead by example and show people that we are not dying from the vaccine, we are dying from Covid. And when we don’t die, we can have severe forms of it which are very debilitating, ”Juvin told CNews television.

Opposition leaders said the slowness of the vaccination program made France the “dunce” of Europe. Damien Abad, leader of the center-right opposition Les Républicains in the National Assembly, demanded an urgent meeting with the Minister of Health.

In a letter, other opposition critics wrote: “Mass vaccination is the ultimate way to lift our country out of the damaging economic situation caused by the health crisis. However, France vaccinates 10,000 times slower than the United Kingdom. “

They added: “France may not be one of the last countries to get vaccinated and yet this is the situation we are facing today.”

Alain Fischer, the government official responsible for France’s immunization program, told Europe 1 that the country has chosen to prioritize the elderly and vulnerable, as opposed to healthcare professionals, as in other countries. “There is no right or wrong choice… These are little things that will seem silly in two or three months,” he said.

Critics say this hesitation feeds conspiracy theories and anti-vaxxer sentiment. Nathan Peiffer-Smadja, an infection specialist at Bichat Hospital in Paris, said the scientific data was clear. “The vaccine is safe and effective. Like many of my colleagues, I believe that we should administer the vaccines faster in order to bring the epidemic under control more quickly. At the rate we are going, we will still be stuck in 2022, ”he tweeted.

France reported 26,457 new confirmed cases on Wednesday in 24 hours, but attributed the increase to an increase in testing. There were 304 deaths in the hospital. The number of positive tests remains low at 2.9%.