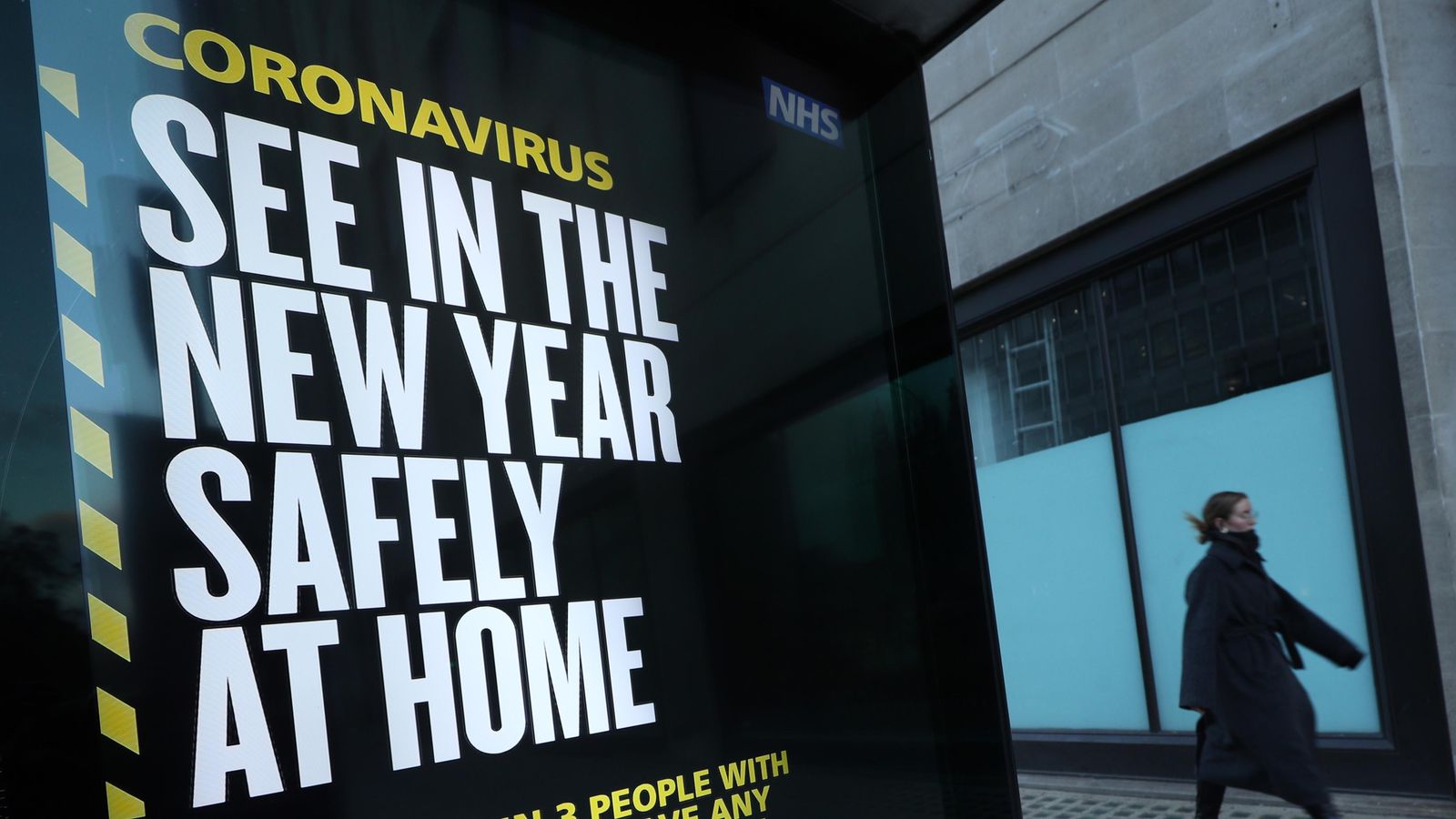 The UK has recorded 55,892 cases of coronavirus in the past 24 hours – the highest figure on record.

Tuesday’s figure of 53,135 cases was the highest since the start of the pandemic.

Public Health England medical director Dr Yvonne Doyle made a passionate appeal in response to the latest figures urging everyone not to go out to celebrate the New Year.

She said the increase in cases had been particularly acute among adults in their twenties and thirties.

COVID updates live from UK and around the world

Dr Doyle said: “We know that the overwhelming majority of deaths reported today are people who have sadly passed away in recent days.

“Every life lost due to this disease is a sadness. It is imperative that we all act now to protect our families and friends.

“We’ve all had to make huge sacrifices this year, but be sure to stay away from others, wash your hands and wear a mask.

“A New Years night will mean you drastically reduce your social contact and may help stop the spread of the virus.”

The number of patients admitted to hospital is also on the rise, with 2,433 people having been admitted on December 22, the last day for which figures are available, the highest number since April 10.

Meanwhile, just under half of all major hospital trusts in England currently have more COVID-19 patients than at the peak of the virus’s first wave, according to the latest figures.

Of 140 acute NHS trusts, 64 were seeing a higher number of patients with symptoms of the coronavirus at 8 a.m. on December 30 than at any time between mid-March and the end of May.

Earlier, it was revealed that the number of people testing positive for COVID-19 in England per week had increased by 33%.

A total of 232,169 people have tested positive at least once in the week through December 23, according to the latest figures from Test and Trace.

The 981 deaths reported on Wednesday were the highest number reported in a single day since April 24.

Infection rates continue to rise across the country, according to the latest weekly surveillance report from Public Health England.

In Northern Ireland, another 11 people have died with COVID-19, the Department of Health said, along with 1,929 other positive tests.

Please use Chrome browser for a more accessible video player


All high school students will see a late return to class and some elementary schools will not open.

London’s NHS has been urged to ensure the Excel center site is “reactivated and ready to admit patients” as hospitals in the capital scramble.

The reopening of secondary schools and many primary schools in England has been delayed and universities are urged to reduce the number of students returning to campus from the beginning of next month.

Prime Minister Boris Johnson said the government was “working as hard and as fast” as possible to deliver the newly approved vaccine from the University of Oxford and AstraZeneca to people, with deployment scheduled for Monday.

An additional 20 million people were placed under tighter restrictions on Thursday after the government announced an extension of Level 4 rules in England in a bid to curb the spread of the coronavirus.

The only part of England that is not in Tier 3 or the higher Tier 4 restrictions is Tier 1 Isles of Scilly.