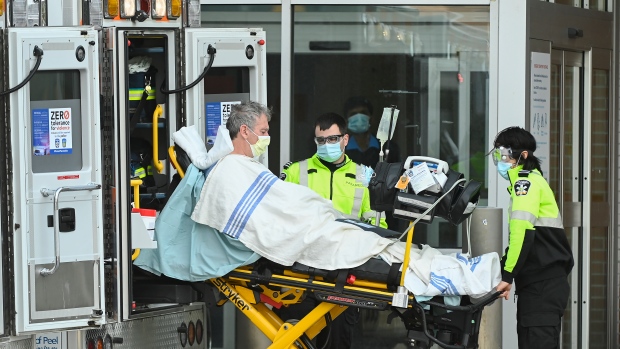 TORONTO – Ontario reports a record number of new COVID-19 cases for the third day in a row as the number of cases exceeds 3,000 for the first time since the start of the pandemic.

The 3,328 cases mark a significant increase from Wednesday’s total, when a record 2,923 infections were recorded. Another 2,553 cases were reported on Tuesday, which was also a record number at the time.

It comes as deaths linked to the new coronavirus are reaching levels not seen since the first wave of the pandemic. At least 56 deaths have been recorded in the past 24 hours, the highest number since May 12, when the same number of deaths was added.

Thirty-nine of the people who died were residents of a long-term care home.

Thursday’s report brings the total number of laboratory-confirmed COVID-19 cases in Ontario to 182,159, including 4,530 deaths and 156,012 recoveries.

With 63,858 tests completed the day before, the province’s COVID-19 positivity rate stands at about 5.7%.

Ontario Health Minister Christine Elliott shared the numbers in a tweet posted Thursday morning while advising residents to celebrate New Years Eve at home to stem the spread of the infection.

“Connect virtually to stay in touch with extended family and friends. If you live alone, consider celebrating exclusively with an additional household, ”she says.

Ontario has been operating under a provincial lockdown since Boxing Day, which has forced the shutdown of most non-essential businesses.

The strict measures are expected to be in effect at least until January 9. Lockdown restrictions will continue for the 27 public health units in southern Ontario until at least January 23.

Most of the cases reported Thursday were found in just a handful of areas in the province.

There were 888 new cases recorded in Toronto, which is a drop from the record 998 cases reported in the city by the province the previous day.

Meanwhile, Ottawa, Region of Durham, City of Hamilton, Region of Niagara and Waterloo have all reported case numbers above 100.

Of these patients, 337 are treated in an intensive care unit, 210 of whom breathe using a ventilator.