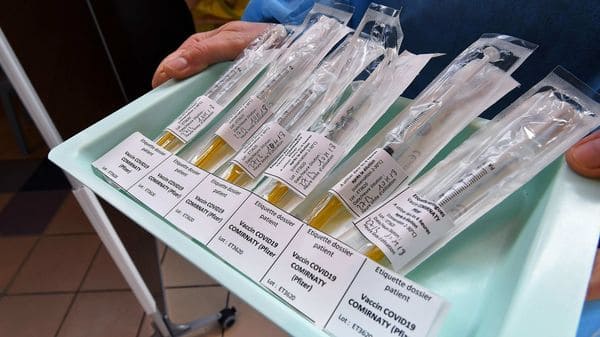 But walk away from this handful of rich countries and a darker reality emerges: The virus still rages across most of the planet, and the uneven distribution of vaccines poses a major public risk as variants emerge.

Since mid-March, Covid-19-related deaths have started to rise again around the world, even as numbers have improved in the United States and the United Kingdom, according to data from Johns Hopkins University. Last week, the director general of the World Health Organization, Tedros Adhanom Ghebreyesus, said that the uneven vaccine supply “is not only a moral outrage, it is also an economic and epidemiological failure”.

Globally, half a billion doses of the vaccine have been administered, according to Bloomberg’s Vaccine Tracker. While injections have been administered in some 140 countries, the vast majority have gone to developed countries which have achieved early doses by the hundreds of millions. This disparity risks prolonging the pandemic, even for places currently leading the vaccination race.

“We need to try to bridge the gap between vaccines and the unvaccinated to truly meet the goals we seek to end this pandemic and get our economies back on track,” Thomas Bollyky, director of global health program at Council on Foreign Relations said in an interview.

Covax, a facility that aims to distribute doses equitably around the world, has started delivering injections to low-income countries like Cote d’Ivoire and Ghana, but the WHO has said more needs to be done.

Here is an overview of the evolution of vaccine disparities and the resurgence of the virus in half a dozen countries.

Israel’s economy has essentially reopened now that half the country is fully vaccinated and new cases are plunging.

People are flocking to restaurants and bars that have survived the pandemic, crowding the country’s beaches and enjoying live concerts and football games in the early days of spring.

Israel is still closed to foreign tourists over fears the spread of variants could undermine its vaccination program. Still, some hotels say they’re full for the Passover feast, which will be celebrated without new movement restrictions. This is a change from last year, when lockouts were imposed during the period to avoid a spike in cases.

The UK remains stuck, but the government’s roadmap to reopening the economy has offered a path to normalcy for a population that is being vaccinated faster than any of its European neighbors.

The country recently passed the milestone of giving a first dose to more than half of its adults. He set a daily record on March 20, inoculating nearly 1.3% of the population in a single day. Hospitalizations have also fallen by more than a fifth from the previous week, bringing some relief to the National Health Service.

Schools have reopened and some employees are starting to return to offices in London’s financial districts, but residents will not be able to eat out or buy non-essentials in stores for another two weeks. Still, the government hopes to remove all lockdown restrictions, including the reopening of nightclubs, by June 21.

The daily death toll has declined steadily since mid-February, as states pushed to speed up vaccinations and balanced medical concerns with protests from anti-lockdown groups.

Yet disparities persist. While New Mexico has administered at least one dose to more than a third of its population, Georgia has just managed a fifth. Inequalities are also present among racial groups: in 16 US states and Washington, DC, less than 10% of the Hispanic population was vaccinated on Wednesday – a milestone most states have reached with white populations there is. weeks. Yet more than a quarter of Americans have received their first dose of the vaccine.

Restaurants in New York City – once the American epicenter of the pandemic – can now operate at 50% of their capacity indoors, with many diners taking advantage of covered seating on Manhattan’s sidewalks. The city’s mayor, Bill de Blasio, has announced plans for a vaccination center on Broadway to vaccinate workers in the theater industry in preparation for a reopening scheduled for September.

About a year after the virus arrived and two months after the start of vaccinations, Brazil is going through the worst period of the pandemic to date.

The vast Latin American country reported 3,650 deaths on Friday, its highest daily toll. On Wednesday, it became the second country after the United States to record 300,000 deaths. Since the start of vaccinations in mid-January, only 6% of the population has received a dose. The crisis prompted neighbors to close borders, impose travel bans and demand forced quarantines.

President Jair Bolsonaro, who has long played down the coronavirus, has now pledged to speed up vaccination efforts. The resurgence of the pathogen follows months of relatively lax rules, which included New Year’s celebrations and underground parties around carnival season in Rio de Janeiro. The recovery also coincided with the growing dominance of a more contagious strain discovered in the northern city of Manaus.

India, a vaccine-manufacturing colossus key to supplying much of the world with low-cost vaccines, has struggled to get vaccinated. Today, the country of nearly 1.4 billion people is slowing exports to keep more doses at home after new infections have increased six-fold since February to more than 60,000 a day.

This week, the government extended the rollout to everyone over 45 and allowed its huge network of private hospitals to charge a subsidized rate for vaccines. These measures have increased vaccination rates and could help Prime Minister Narendra Modi meet the goal of vaccinating 300 million Indians by August.

While India has been reluctant to reimpose lockdowns after a costly shutdown last year has done little to stop the spread of the virus, there are growing fears that tighter restrictions are needed.

In the country with the highest death toll in the European Union, the daily death toll has increased since the start of the month as a highly contagious strain spreads across the country. Prime Minister Mario Draghi urged the EU to rely on pharmaceutical companies to meet vaccine delivery commitments, while warning that Italy will block exports from companies that breach contracts .

A general has been appointed as the new virus czar to speed up vaccine rollout and ensure all regions of Italy keep pace. Draghi hopes to gradually ease Italy’s lockdown after the Easter holidays and vaccinate 80% of citizens by the end of September.