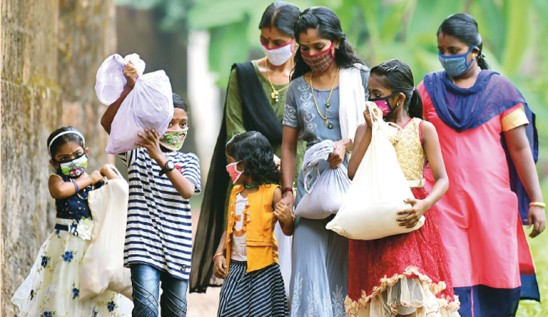 Thiruvananthapuram: The state government has so far spent Rs 4,183 crore to provide free foodgrain kits to ration card holders. The distribution of kits in the state continued even after the suspension of rice and groundnuts provided by the Central Government under the PMGKAY scheme last December. However, the BJP and Union Minister V Muraleedharan are spreading rumors that the Center is providing kits and food grains to school children.

The distribution of free foodgrain kits started from April 2020 following the Kovid crisis. The entire amount is paid by the State Government to Supplyco. About 10 crore food kits were distributed till March. An amount of `4183 crore was spent for this.

Non-priority cardholders were also given 10 kg of rice at Rs 15 each. Under the PMGKAY scheme of the Central Government, the Center had distributed 5 kg of rice per card and 1 kg of peas / card per card. Its distribution was stopped by the Center last December. The Parliamentary Food and Public Distribution Standing Committee had recommended that the free distribution of foodgrains be continued. The state also sent a letter asking for the distribution to continue. Yet to no avail.

Distribution of food kits for the months of February and March is progressing through ration shops. In March and April, the state had decided to provide 10 kg each to priority cardholders at a rate of Rs 15 per kg. This was blocked by the Election Commission on the complaint of the Leader of the Opposition.

May and June: 10 kg of rice at Rs 15 for non-priority cardholders

130.42 tonnes of rice for community kitchens