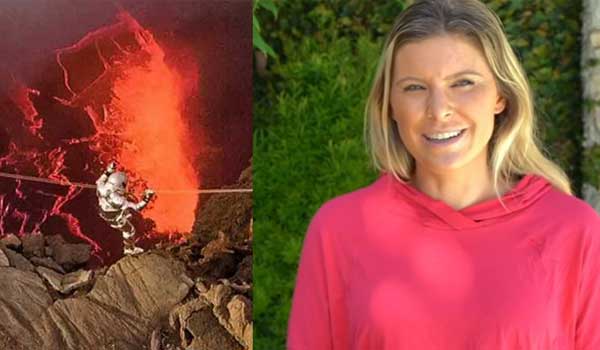 Karina Oliani, a native of Brazil, shocked the adventurous travelers by crossing the boiling lava lake. Karina Oliani not only crossed the lava lake but also made her mark in the Guinness Book of World Records. Karina traveled 100.58 meters (392 feet) on a metal rope tied across a lava lake.

It is one of the most difficult trek routes in Africa. Mostly adventurous tourists visit this place. Trekking with experienced organizers and guides is permitted. The Erta Ale volcano in the Afar region of Ethiopia and its environs are known as one of the most difficult landscapes on earth. The crater crater of a continuously erupting volcano is filled with constantly melting lava. Erta Alley is 613 meters (2,011 feet) high.

Her love of adventure and her interest in the wonders of nature led her to an adventurous trip to the lava lake in Erta Ale. When a team was looking for help to climb the volcano site, many people backed away in fear because it was too dangerous. That’s why I came up with the idea of ​​traveling on a metal rope tied above a hot lake where the metal burns.

Although many people were discouraged by this adventure, Karina successfully completed the journey. Frederick Schutt, a Canadian expert, helped Karina pull the metal rope. The safety was also ensured by tying metal ropes to ropes attached to various parts of the lava lake. Karina wore clothes that provided protection from the extreme heat for the adventure.