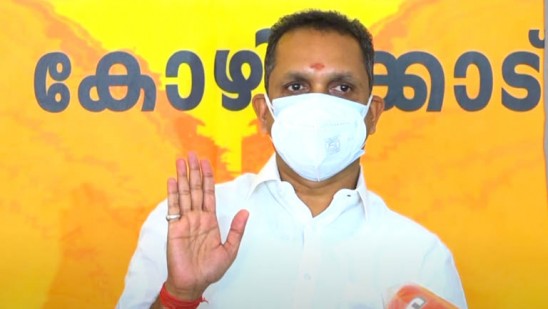 Thrissur
State President K Surendran will be questioned by the police in the BJP money laundering case. The Special Investigation Team issued a notice to appear at the Thrissur Police Club at 10 am on Tuesday. The notice was issued when he reached Surendran’s house in Kozhikode. The probe brought to Surendran the crucial information obtained while checking the phone call lists of Dharmarajan who smuggled money for the election campaign. The BJP’s pipe deal came to light after money was looted in Kodakara, Thrissur.

Among the seven phone calls Dharmarajan made at midnight on the day of the robbery was the number of K Surendran’s son Harikrishnan. According to the call list, BJP state organizing secretary M Ganesan, office secretary G Girish, Surendran’s secretary Dipin, driver Libesh and Alappuzha district treasurer KG Kartha were questioned. Dharmarajan has been called several times from the phones of the secretary and the driver. Both said that it was with Surendran’s knowledge. KG Kartha also said that the state president should be asked about the money laundering. The BJP is of the view that it should not co-operate with the probe as the loophole is tightening. It is not clear whether Surendran will attend. The money for the BJP Class A constituency in the southern district was looted with the connivance of the leaders.

All with the knowledge of the leadership

The money was taken to Alappuzha to be handed over to KG Kartha on the instructions of BJP organizing secretary M Ganesan and G Girish. Seven were charged in the April 3 incident. BJP leaders intervened to help the accused and destroy the evidence. The accused was summoned to the office of district president KK Aneesh Kumar as part of a conspiracy, police said.