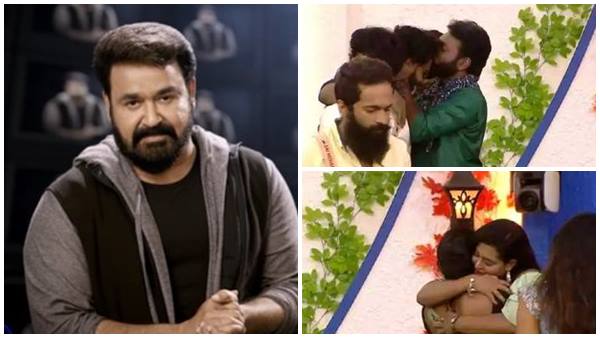 This time there were four people on the elimination list. There was a Feroz-Sajjana couple but they were unexpectedly evicted. Ritumantra, Adoni, Sai and Sandhya were left behind. The audience was wondering who would be out.

Suspense for competitors only

But Mohanlal made it clear at the outset that there would be no elimination this time. But it did not inform the contestants. But without leaving the audience on the edge of curiosity, his move made it clear in the first place.

First, Mohanlal kept those on the elimination list together. It was in the order of Ritu Mantra, Sai, Adoni and Sandhya. Ritu and Sai were relieved without much suspense and told to sit down with them.

Finally, Mohanlal said a break to Sandhya and Adoni to come out. With this, the contestants were totally confused. It is usually called close to Mohanlal. But this time he was told to come out. This was pointed out by other contestants.

The elimination of Sandhya and Adoni came as a big shock to the other contestants. Everyone hugged and started crying. Dimple and Nobby all really cried. Surya was standing with her face covered.

Adoni’s farewell message was that he has no personal problems with anyone. Sandhya said the same. Adoni told the season specifically about this. Eventually everyone took the last selfie.

That’s when Bigg Boss’ announcement came as a shock to the contestants. It was like not being able to open the door to the outside. Everyone cheered and shared their joy when I was told that the key was missing. Later, Mohanlal came and said that it was a prank.

Adoni, Anoop and Sandhya clashed in next week’s captaincy task. The victory was for Adoni. Thus, Mohanlal came up with the ‘prank’ of elimination at the time he was selected as the captain. Anyway, it has been confirmed that Adoni will not be in next week’s nomination.